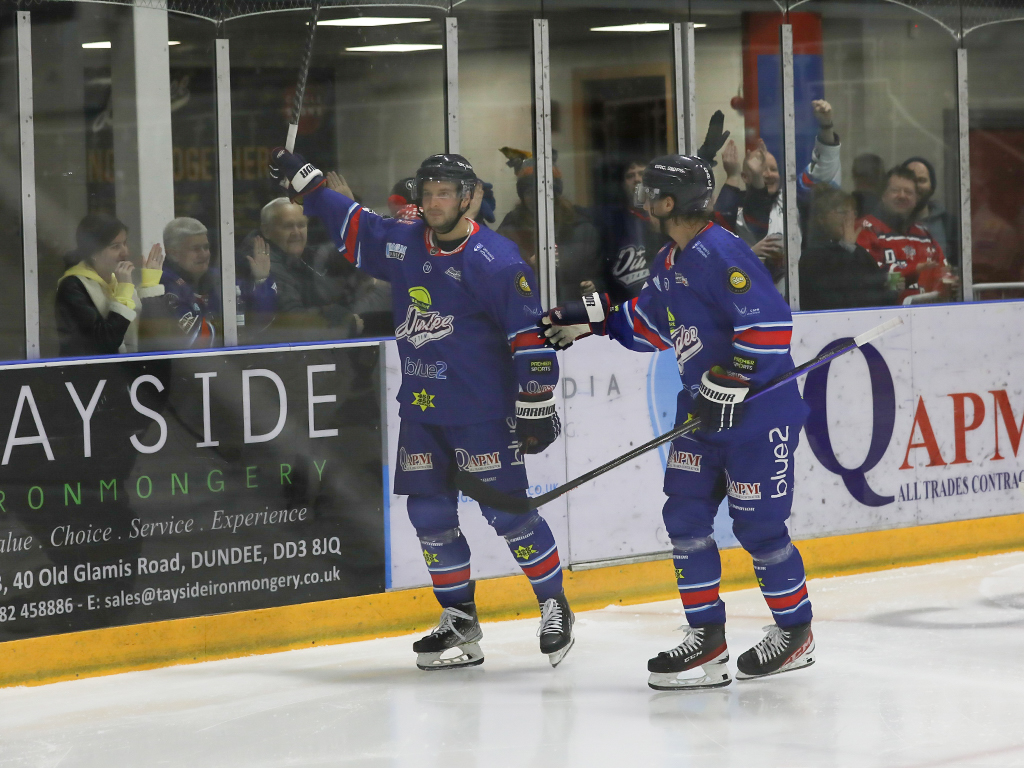 Chris Lidjsman 28:28
2 Closing His Hand on the Puck

The Trade-Mart Dundee Stars were looking to build off last weekend’s strong performances against Belfast Giants but this time making sure to turn their dominance into goals and two points, as they welcomed Coventry Blaze to the DIA for the second time this season.

Ben Sokay would be the only Stars missing from the line-up as an upper body injury has ruled him out for a second match in a row, but it would be a bruising opening 20 minutes for Dundee as four players ended up wounded.

In the opening minutes, one Star was cut open leaving a pool of blood on the ice, before Hugo Reinhardt took a high-stick to the face drawing more blood onto the ice and the Swede had to leave the game for repairs.

Defenseman, Kris Inglis would then be struck in the neck by a deflected puck, leaving him in some pain before his fellow Dundonian, Craig Garrigan took a hard shot to the back of his calf.

Despite all the cuts and bruises, the Stars were the most dominant with possession as they broke up the Blaze’s transition well and allowed them a handful of clear-cut chances that goaltender, Anton Svensson gobbled up. 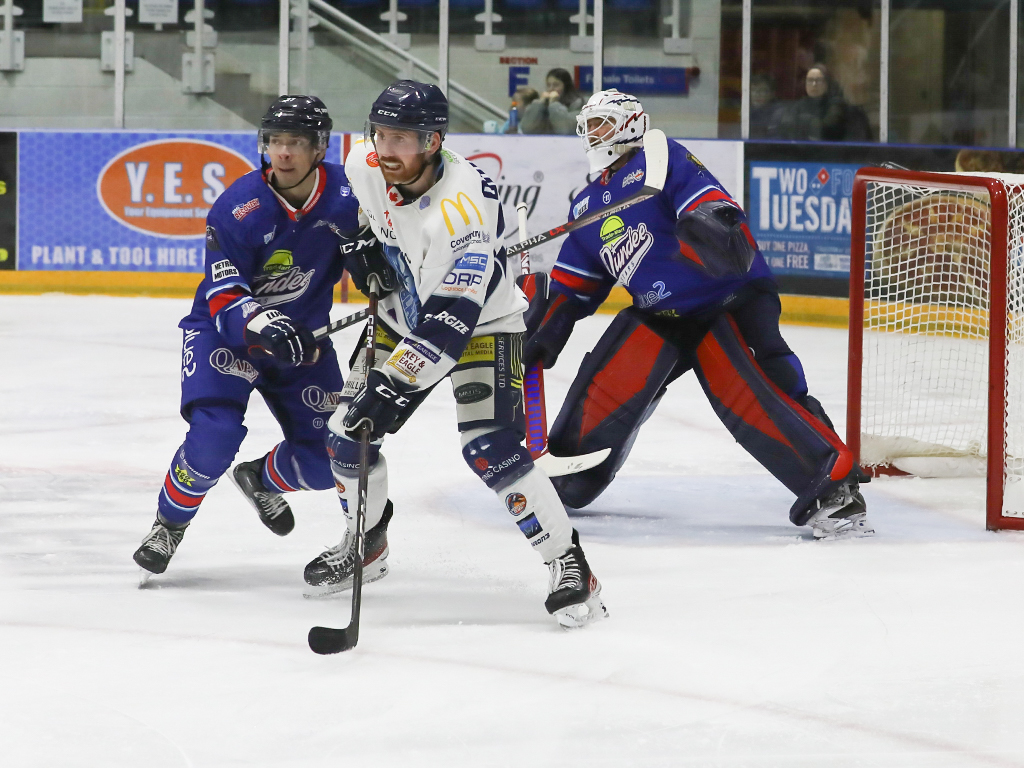 Jeff Mason’s men were working the Blaze well and came closest to breaking the deadlock when a 17th minute penalty against J.D. Dudek put them on the powerplay and Inglis almost snuck his shot between the arm and body of Paavo Holsa.

However, the home side’s control finally paid off as Elijiah Barriga opened the scoring and he did so with a flashy move that saw him put his stick between his legs and flick the puck past the Blaze goalie, shortly after the two-minute penalty had expired.

The Stars went into the first break still holding onto their 1-0 lead and in the second session, they quickly found a way to double it and this time they would convert on the powerplay.

With Dudek returning to the box for an interference foul, Johan Eriksson had possession just inside the Coventry blueline, where he fired a hard but low shot in towards goal and whilst it was off-target, Romans Semjonovs was perfectly placed to turn the puck home.

The Stars had taken a tight grip of the game after netting their second goal but a familiar story of wasted chances combined with an unfortunate penalty, allowed Danny Stewart’s side back into the game.

Dundee defenseman, Chris Lidjsman has been boxed for covering the puck with his hand when he was knocked over in front of his own goal and that put him in the sin bin and the Blaze would score off the resulting powerplay to cut the lead to one.

With every player, except for Coventry’s Garrett Johnston, battling for the puck in front of the Dundee net and after Svensson made a number of saves, the puck eventually sprung out of the scrum for Johnston, who was perfectly placed to send it back towards goal and his shot hit the back of the twine.

Dundee looked disappointed as the game resumed and the Blaze quickly seized their chance to get back onto level terms, as just four minutes later, Nathan Ripley fired his shot high past the Swedish keeper.

The second period ended with the game still tied at 2-2 but the Stars needed to regain control of the game in the third and they were hoping the Blaze would tire in what would be their sixth period of hockey in the last two days. 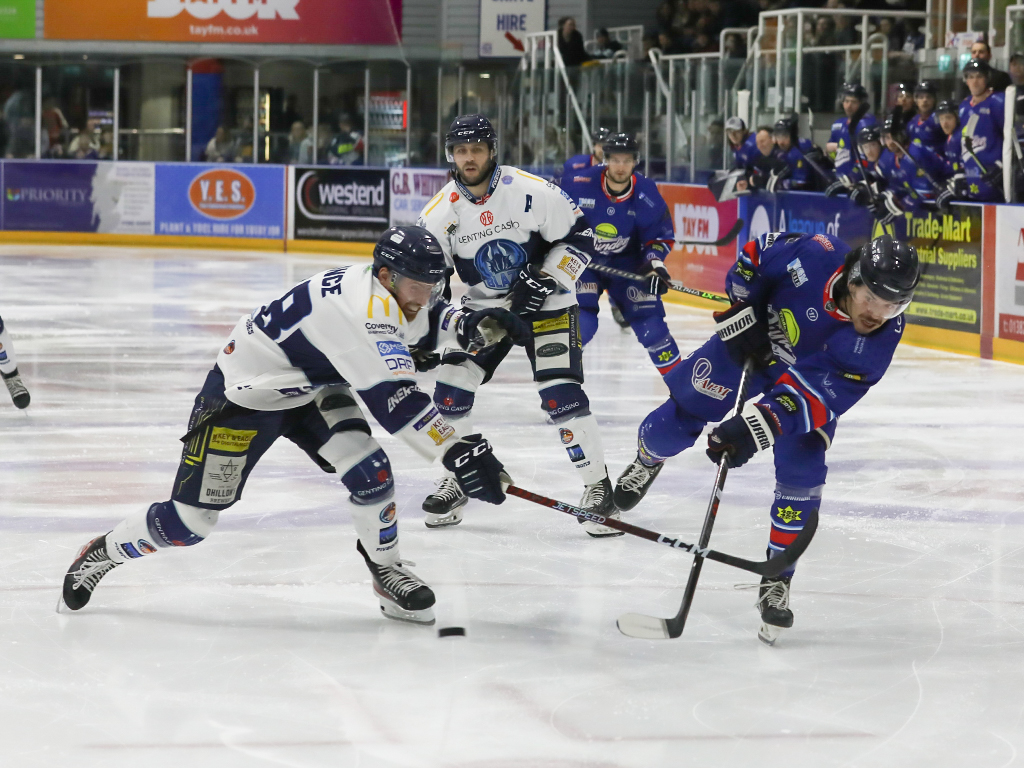 The Tayside team were given all the chances they needed to retake the lead as the Blaze’s poor discipline kept them having to play shorthanded throughout the first period and whilst on man advantage, Dundee came within inches of a third.

After Holsa made a spectacular pad save to keep one shot out, the rebound was lifted over him by Barriga but before it could cross the goal line, the Coventry defenders had dislodged the goal from its moorings.

After a video review, it was determined the puck did not go in but the Stars did receive another powerplay for the visitors attempt to move the goal.

However, the West Midlands club would see out the minor penalty and came back to full strength, only for them to end up two players down for a full-two minutes, as Brady Norrish and Tanner Lishchynsky both shot the puck into the stands from their own end.

As time almost ran out on their five-on-three powerplay, Semjonovs picked out an unmarked Barriga at the back-post and he swiftly moved across goal and buried his shot into the top left corner.

The Blaze responded by fighting hard for another equaliser but shot themselves in the foot with another penalty with only three minutes left to play, but the English side stayed strong and kept the lead to just one, and they managed to squeak home the equaliser in the 59th minute.

Defender, Alexander Kuqali had possession out on the left flank and decided just to send the puck towards goal and luckily for him it slipped through the legs of Svensson and into the net!

The match then went into overtime to try and decide a winner, but even with Philippe Sanche taking a minor penalty for tripping, no winner would be found and a shootout would follow.

The opening round of penalty shots so both Semjonovs and Coventry’s Colton Yellow Horn both fail to score, before Eriksson and Jack Billings both found the back of the net.

In the third round, Philippe Sanche kept the pressure on the Blaze as he beat Holsa and Svensson backed him up with a save on Kim Tallberg.

Dundee’s man of the moment, Barriga then put it all down to the visitors as he gave the Stars a 3-1 advantage after burying his shot and Johnny Curran would see his crucial effort denied as the Dundee goalie redeemed himself and the Stars picked up a second valuable point to move four points clear of Sunday’s opponents, Glasgow Clan. 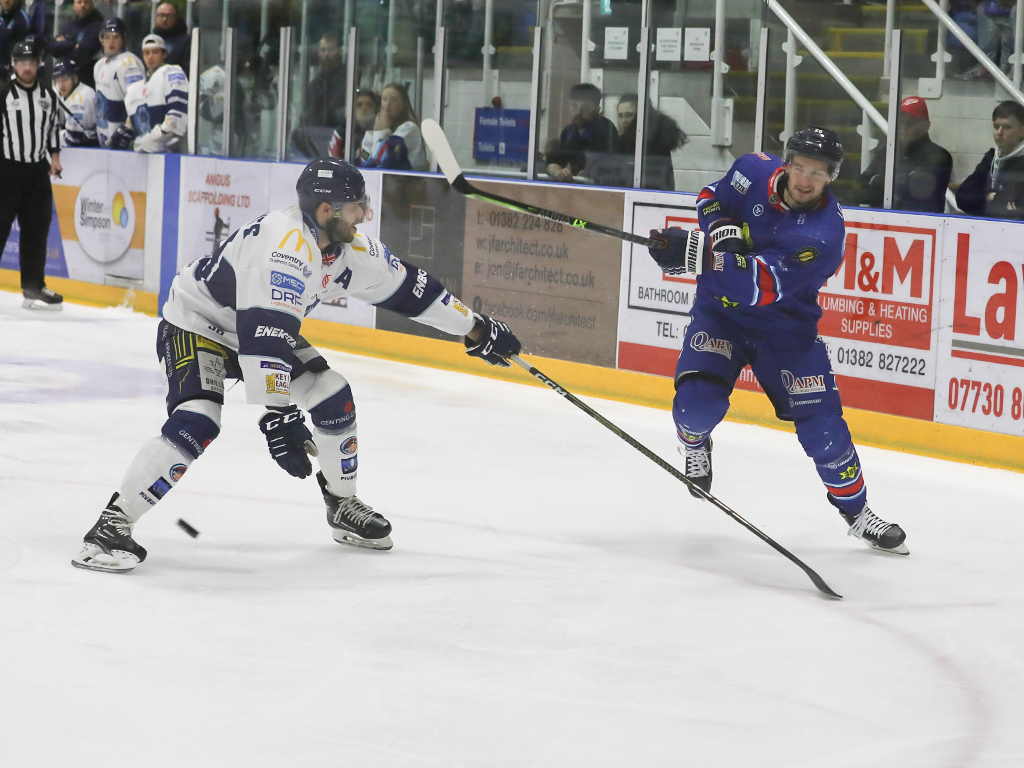