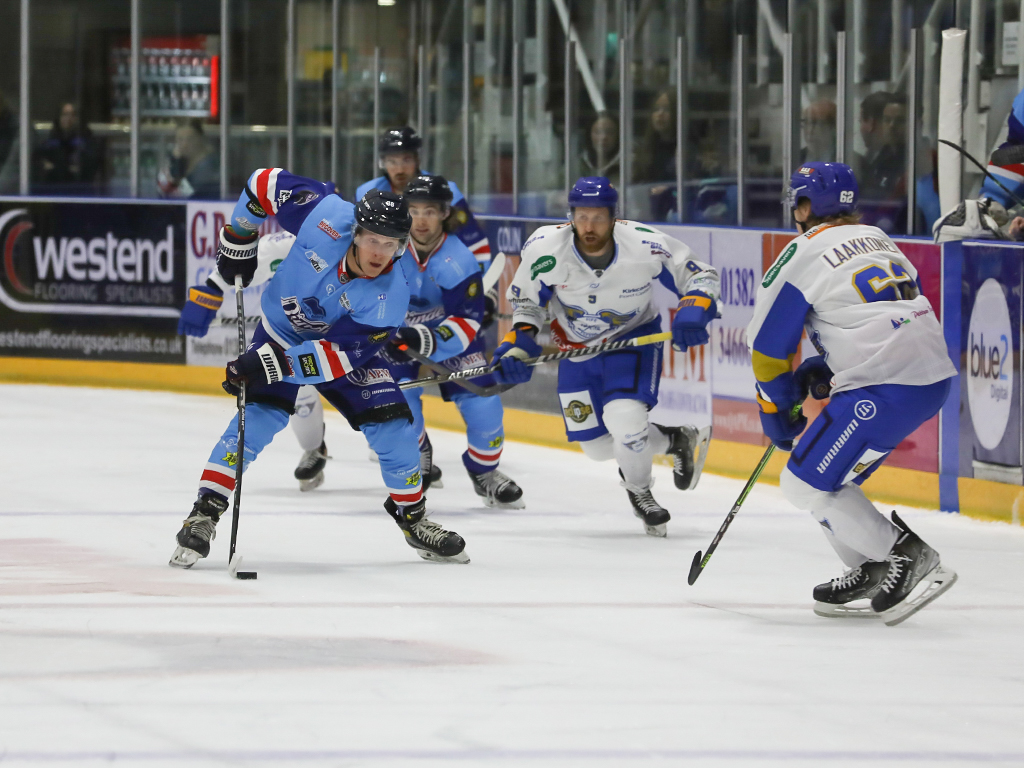 Trade-Mart Dundee Stars were searching for a third win in a row and a second victory over their biggest rivals, Fife Flyers in just five days.

However, both teams came into the match without three players as Dundee were missing the injured trio of Craig Garrigan, Kris Inglis and Ben Sokay, while Fife were missing Jonas Emmerdahl, Simon Fernholm and Mikael Johansson.

Despite the short-benches, the match started with a fast pace and the action went from end to end as both sides tried to capitalise on some chances early, but the first clear cut opportunity did not come until the eighth minute.

Dundee were pressing hard and after winning possession back in the middle of the ice, Stars forward, Carter Folk slipped past his marker and took the puck into the Flyers end, where he found the on-rushing Chris Gerrie at the other side of goal and open for a pass.

The Canadian winger’s pass found Gerrie but a sprawling Owen moved across the goal quickly and was able to beat away Gerrie’s effort, to keep the game scoreless.

However, only a few moments later, the deadlock would be broken as Janne Kivilahti used time and space to wait out Dundee goaltender, Anton Svensson.

The Finn had possession and was at close range and waited until Svensson made his move before dragging the puck around the Swede and firing in from the left side, in the 12th minute.

Dundee had wasted a powerplay earlier in the match and when Fife were awarded their first man advantage, they quickly capitalised to double their lead.

Kivilahti pulled the same move again, but this time after arriving at the net front with pace and again shot in from the left side, after 15 minutes.

Former Stars captain, Chris Lawrence then added a third goal for the visitors in the 17th minute, as he was open at the back post to turn home Shawn Cameron’s very late, cross-goal pass.

Jeff Mason’s men then had a late chance to stop the bleeding and get on the board, as Fife’s Zach Phillips was punished for tripping inside the final minute of the first and Dundee’s powerplay spanned over to the second period.

Powerplay’s would be the focal point of the middle session with the home side having three chances to get themselves back into the match and one powerplay was a lengthy five-minute advantage, as Fife’s Shawn Cameron was thrown out of the game for a check to the head on 30 minuutes.

Dundee failed on all three chances to even get on the board and they were also lacking a lot of puck luck as Flyers netminder, Shane Owen had given up a number of rebounds all night, but none fell just right for the Stars.

Heading into the final period, the Stars were outshooting their rivals 29-8 and they soon finally found a way past Owen, but not until after they fell 4-0 behind.

Just under three minutes into the final session, Phillips turned in Lucas Sandstrom’s backpost pass to extend the Flyers lead to four. but 10 minutes later, Dundee finally broke through the Kirkcaldy club’s defences.

Defenseman, Ryan Verrier skated to the top of the right circles and ripped a low shot just under the blocker side of Owen to make it 4-1, with just over seven minutes to play.

That goal gave the Stars some life and they soon added a second to start causing some nerves for Todd Dutiaume and the Flyers, but this time Romans Semjonovs was in the right place to tap home a rebound off the post, as Elijiah Barriga’s shot rebounded out behind Owen and into the path of the Swede, on 56 minutes.

After using their timeout, Dundee gambled and swapped goaltender, Svensson for the extra attacker, but less than two minutes from time, Lucas Sandstrom shot into the empty net from his own end, to secure a 5-2 win for Fife.

The Stars have no time to mull over the defeat however, as they visit Glasgow Clan on Saturday and welcome Sheffield Steelers in their regualr season opener, on Sunday.