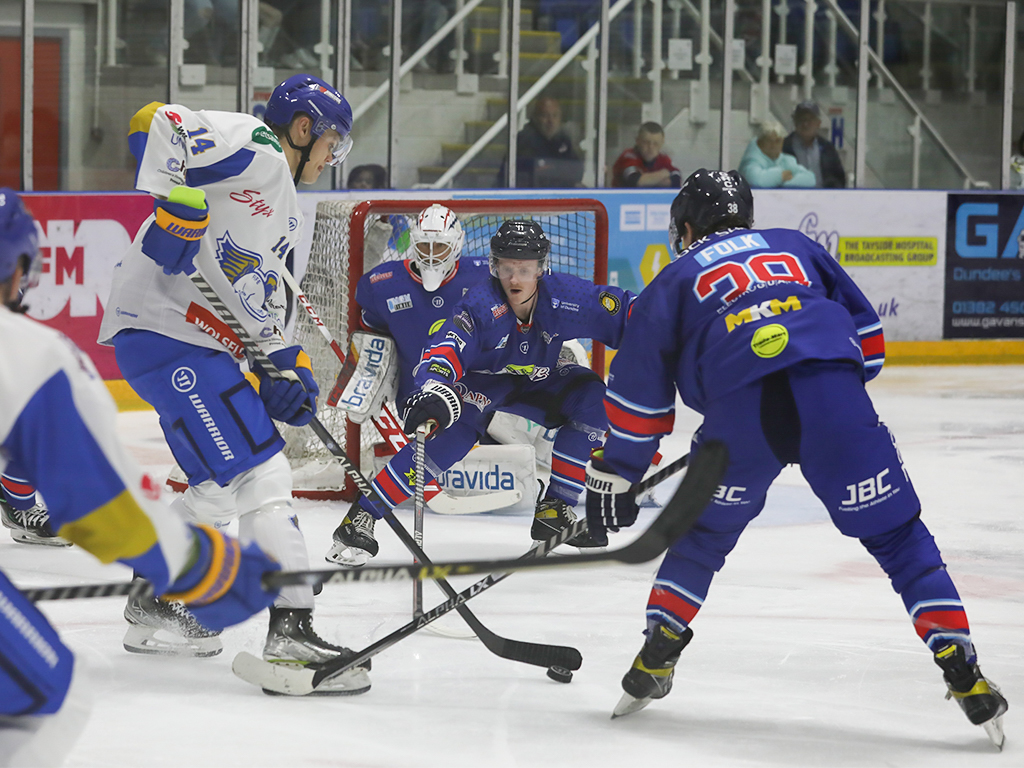 The Trade-Mart Dundee Stars welcomed Fife Flyers to the DIA for the first time in the 2022-2023 and they got off to the perfect start.

It took less than two minutes for the Stars to open the scoring as former Flyer, Erik Näslund rushed towards the Fife net and arrived at the perfect time to tap in a loose puck, after several Dundee players had been battling to get it past netminder, Shane Owen.

Whilst the Stars had the lead, they were playing without both Craig Garrigan and Ben Sokay through injury, but had Ben Brown back in the line-up after his two-goal performance for Dundee Comets on Saturday night.

The Flyers then had a chance to equalise in the 11th minute as they went on the powerplay for the first time, with referee Toby Craig penalising Dundee defenseman, Kris Inglis for a roughing foul.

Fife were unable to utilise their man advantage, although there were plenty chances for both teams to score but the Stars were being met by some strong goaltending from Owen and the Flyers were struggling with their positioning to finish off some dangerous passes.

Another penalty against the Stars put Fife back on the powerplay, this time Jonathan McBean being charged with boarding in 17th minute, but that only allowed the home side to double their lead.

With the Flyers looking to tie the game, Dundee’s Philippe Sanche and Carter Folk forced a turnover in possession at centre ice and headed straight for the Fife net.

Sanche went in on goal and after being initially denied by Owen, he and Folk both jabbed away at the loose puck before it was eventually forced into the net and Sanche was given credit for the shorthanded goal on 18 minutes.

Jeff Mason’s men carried their two-goal lead into the second period and had to defend it straight away as Ryan Verrier was punished for tripping up his opponent.

However, Dundee survived another Flyers powerplay, but gave up a goal in the 24th minute as James Spence fires a shot over the shoulder of Svensson from the left face-off circle.

Todd Dutiaume’s men then tied the game on 27 minutes as Simon Fernholm’s shot slipped through the grasp of the Stars keeper and it did not stop there for Dundee as they had to then kill another penalty.

Although, a tripping call against Fife’s Shawn Cameron cancelled out his side’s man advantage, but once he was released from the box, he put the Kirkcaldy club ahead in the 31st minute.

The Flyers had a two-on-one break and Fife’s Lucas Sandstrom drew in Dundee defender, Devon Daniels before setting up Cameron to finish at the back post.

The Stars then tightened up again defensively and came close to netting their third but had to fight through a difficult five-on-three powerplay near the end of the period, after Kris Inglis and Sanche were both boxed for minor penalties.

Dundee did go into the final intermission still down by a goal, but in the third period both teams would swap goaltenders to give both Brython Preece and Fife’s Andrew Little a taste of the action.

This time it was the Flyers who were falling into penalty trouble and that allowed the Stars to net two quick powerplay goals to take a 4-3 lead.

First to score was Folk as he waited for Drydn Dow to round the net and then the Canadian skated into Dow’s pass in front and smashed it past Little, on 46 minutes.

Then, two minutes later a cross-ice pass from Semjonovs found Sanche on the left wing and he fired past Little to put the Stars ahead and Dundee did not stop there, as in the 50th minute, Mac Howlett dropped the puck back for Devon Daniels to hit home, and make it 5-3.

A quick flurry of goals from Dundee put the game out of reach for Fife and the Stars ended weekend with back-to-back wins, that sets them up for their rematch with the Flyers next Saturday in Kirkcaldy.