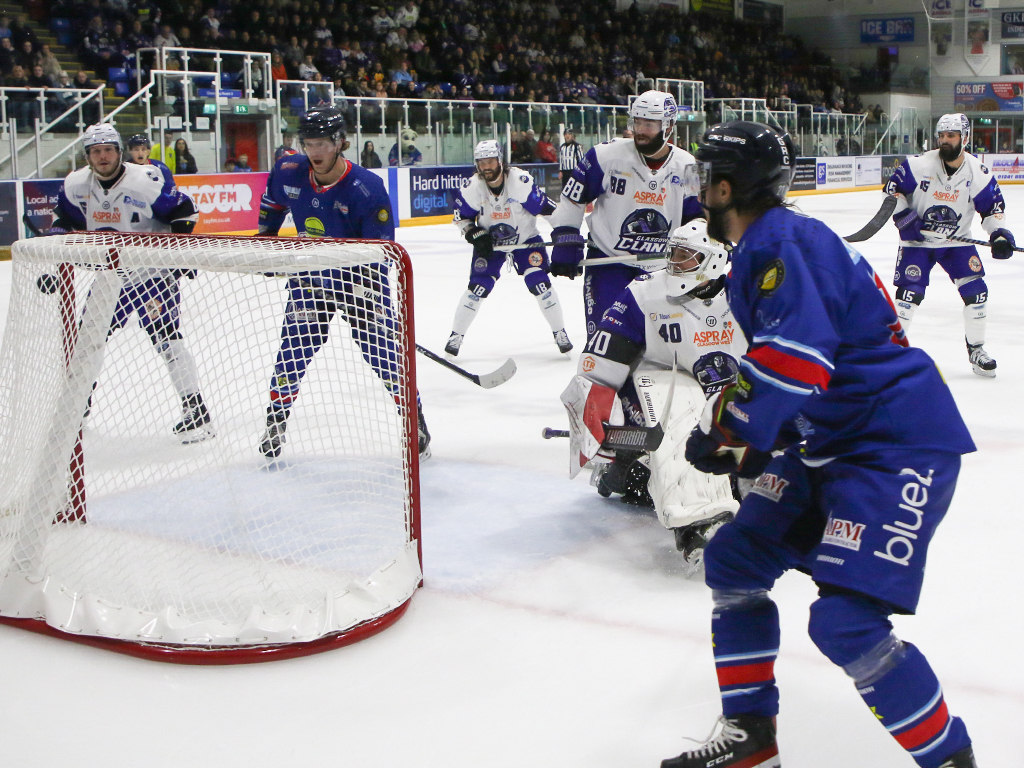 The Trade-Mart Dundee Stars were in need of a bounce back performance as they hosted Glasgow Clan on Saturday night, just 24 hours after losing 6-1 on the road to the Braehead Club.

The Stars were missing injured forwards, Ben Brown and Hugo Reinhardt from their line-up and faced a Clan side with the same number of available players, but that did not stop the visitors from scoring straight from the opening face-off.

After just 24 seconds of play, Gabriel Chabot shot home a loose puck that had drifted to the right side of Anton Svensson’s goal and that sent the large travelling support of the Clan into eruption.

Although, the visitor’s noisy atmosphere was soon combatted by Dundee forward, Ian Parker as he dropped the gloves with Glasgow’s Brad Kennedy and the two went toe-to-toe at centre ice.

Six-foot-nine-inch, Parker would hold an extra seven inches over his opponent and his long reach allowed him to land some heavy and devastating blows that forced Kennedy to the ice and then to the dressing room for repairs as he was leaking blood. 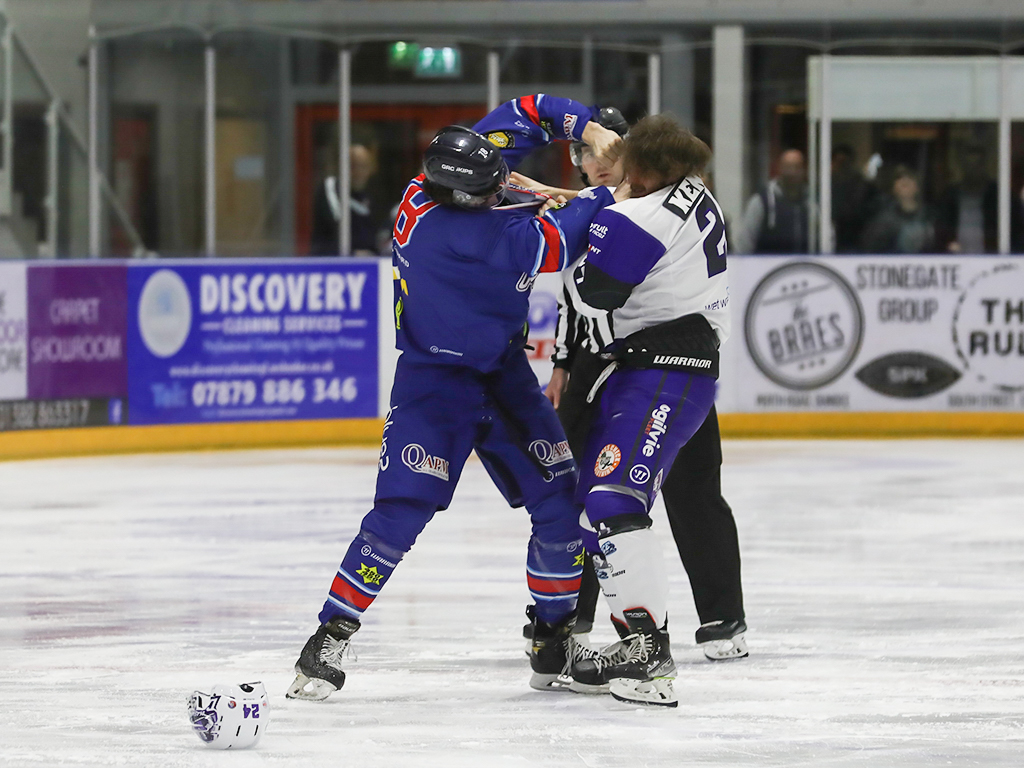 The big Canadian’s bout had done exactly what he hoped for and turned the atmosphere and momentum fully into Dundee’s favour and they began hounding the Clan net with shots as they searched for the equaliser.

Eventually the game tying goal would come and on the five-minute-mark, Phillipe Sanche’s low effort found its way into the bottom corner of John Muse’s net, but the Clan goalie had not be set for the shot as he was busy protesting to the referees over a possible foul.

Glasgow did not sit back and sulk however and just two minutes later, Gary Haden was left unmarked on the doorstep of the Dundee goal, allowing him to smack home Mathieu Roy’s pass and restore the Braehead club’s lead.

Despite another setback, the Stars were not disheartened and 33 seconds later, the Tayside team had their second equaliser of the night as Elijiah Barriga fired a wrist shot straight into the top corner.

The two rivals then became locked in a tussle for the lead but the next go-ahead-goal would come before the end of the first period and it went the way of the home side, as the Stars took their first lead of the night.

With Glasgow’s Craig Peacock in the penalty box for an interference foul, the first powerplay of the night would be capitalised on as Johan Eriksson got on the end of a loose rebound and lofted his shot over the sprawling Muse, giving the Swede his first goal for the club on 15 minutes.

Dundee would start the second period on another powerplay and soon had a two-man advantage as Stephen Dixon’s side failed to control their discipline and that allowed Sanche to net his second of the game.

The Canadian had possession down on the goal line and to the left side of the net, but he smartly used the stick of Clan defenseman, Colton Waltz to deflect his shot up and past Muse, just over a minute into the period. 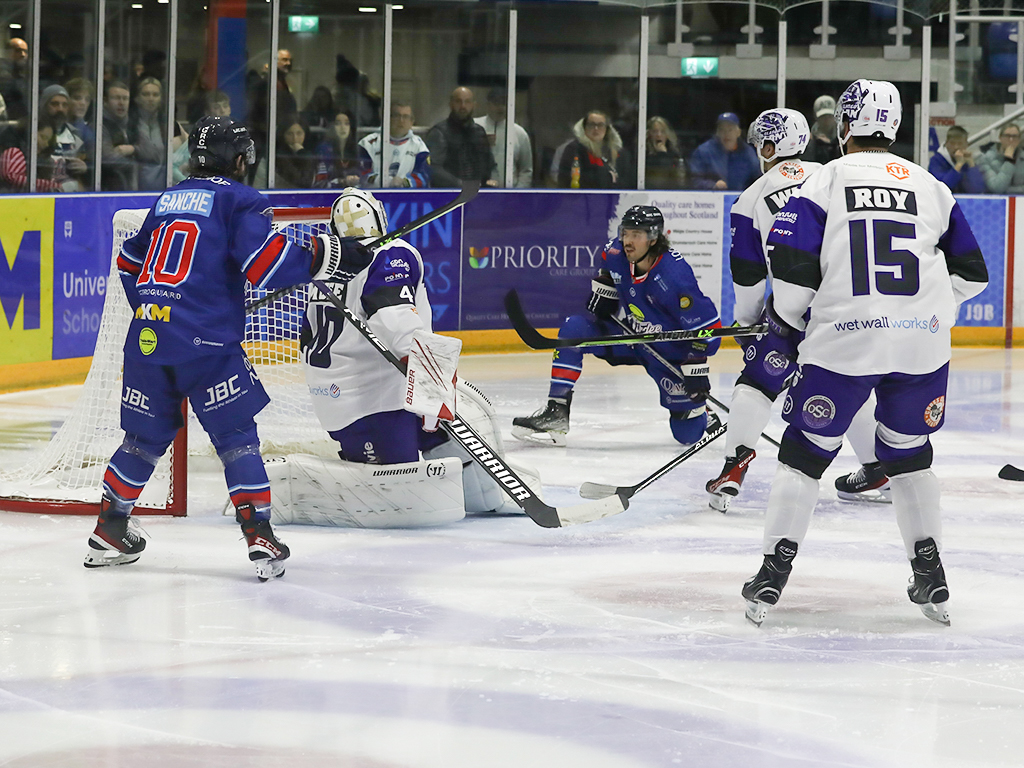 Jeff Mason’s men would then extend their lead to 5-2 in the 28th minute as they made a quick break down the ice, which ended with Drydn Dow squaring a pass to Barriga for a back door tap-in.

Although, after calling a timeout, the Clan found a quick response as John Dunbar pulled off a flashy deke to keep the puck away from the Dundee defenders, before tucking his shot round Svensson, only 20 seconds after the restart.

The second session ended with the Stars still two goals ahead but each side were pushing hard for the next goal and that continued on through most of the third period, but the crucial goal did not come until the final two minutes when Parker fired into an empty net, as the Clan pulled their keeper.

Dundee have now won three home games in a row and stay on home ice for their next game as Nottingham Panthers come to town on Saturday night, then on Sunday, the Stars make their first trip of the season to Wales for a battle with Cardiff Devils. 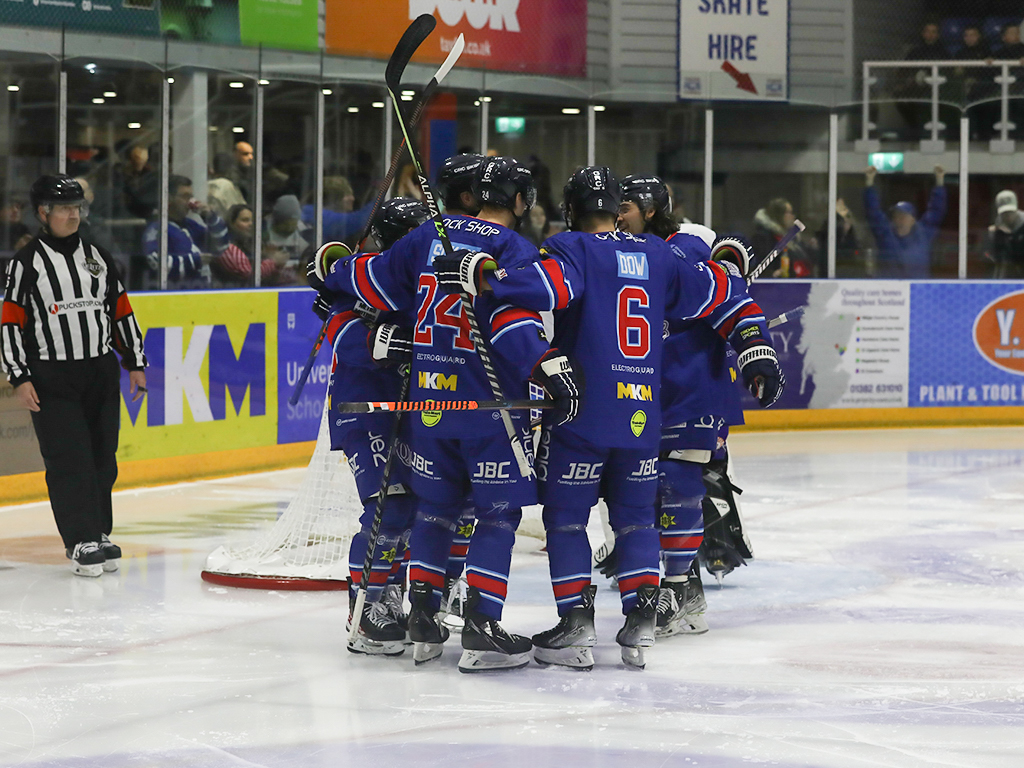