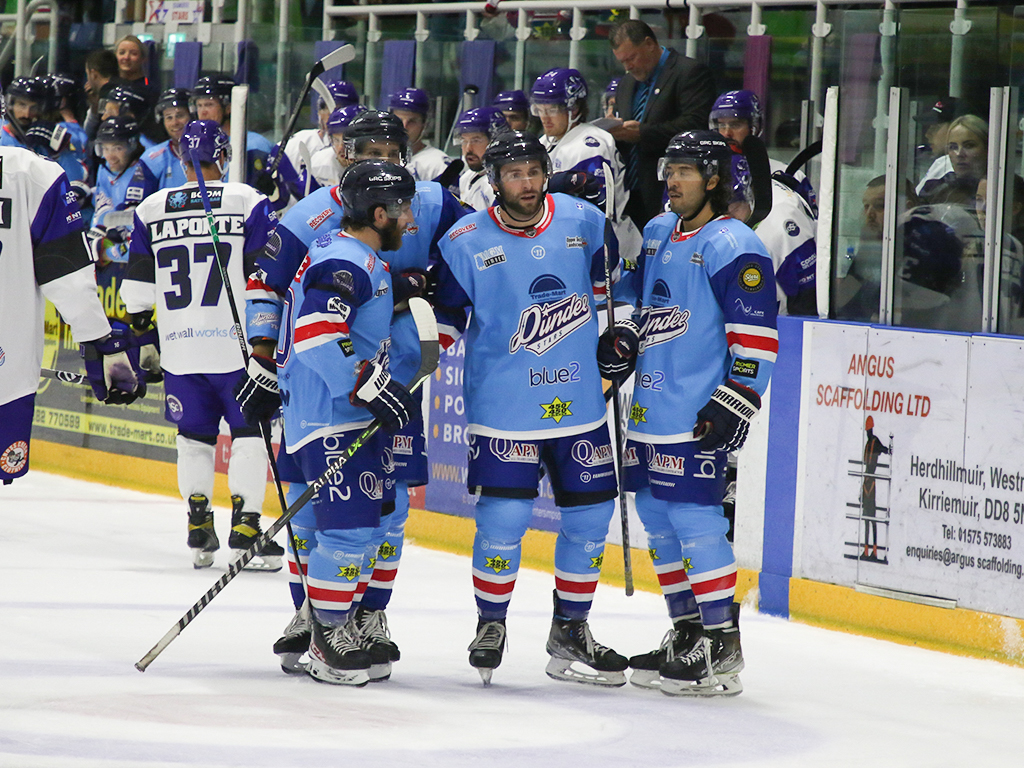 The Trade-Mart Dundee Stars were aiming to finish off the perfect start to their opening weekend with a perfect ending, as they looked to complete a four-point weekend.

A 3-0 road win over arch rivals, Fife Flyers gave the Stars just the start they wanted and Sunday night’s clash with Glasgow Clan provided them the opportunity to complete the double over their Scottish rivals.

Missing from the Dundee line-up was injured forwards duo, Craig Garrigan and Ben Sokay, but also Ben Brown and Jonathan McBean, who were playing with their other teams as part of their two-way contracts.

It only took 11 minutes for the Stars to score their first goal of the season, last night in Kirkcaldy and it took them even less time to open the scoring against Glasgow, as Ryan Verrier found the back of the net after only four minutes.

The defenseman netted the first professional goal of his career by firing a long-range effort through traffic, from just inside the blueline and the puck found its way into the top left of the Glasgow goal.

Dundee then kept up the pressure on the Clan and were close to adding a second on numerous occasions as Clan goalie, Zach Driscoll had to rely on the help of his defence to clear away a few spilled rebounds.

The home side also had a five-on-three powerplay just moments after they took the lead, but failed to punish the Braehead club’s ill-discipline and Malcolm Cameron’s men would also waste their own man advantage later on in the period.

Glasgow were only on the powerplay for a few seconds as they took another penalty and cut their own man advantage short, but they did produce an equaliser whilst playing four-on-four.

With both team’s serving minor penalties, Clan forward, Nolan LaPorte had time and space in front of the Stars goal to pick out the top right corner of Anton Svensson’s net, which tied the game at 1-1 after 16 minutes.

The first period ended with the match still tied and in the second period, the visitors were the ones to get a quick start this time.

A turnover by Dundee led to the Clan breaking through on goal and LaPorte set up his teammate, Mitch Jones for an easy finish, as he sent a cross-goal pass to back post for Jones to tap in, on 24 minutes.

Glasgow then had some chances to open up a bigger lead and put themselves in a good position away from home, as Dundee took three penalties in a row, however, the Stars stayed strong to keep the score at 2-1.

Another shot from just inside the blueline, found its way past Driscoll and that gave the Canadian defender, his first in a Stars shirt and he would also net his second, just before the end of the period.

With the middle session closing out, the Stars were hounding their opponents with constant attacks and pressuring them into their own end, but after the Clan had repelled one attack, Dundee quickly circled and Hugo Reinhardt picked out the rushing Joe, to put him in on goal.

Once again, Joe calmly pick his spot and sent the puck in off the right post to put Dundee 3-2 ahead, with only 30 seconds left on the clock.

The third and final period, then saw the Clan quickly tie the score at 3-3 as Hugo Reinhardt’s holding foul gave them a powerplay, in the 42nd minute and that allowed Gary Hayden to redirect Gabriel Chabot’s shot past Svensson.

The action then went from end to end as both teams were digging deep to find the next goal, which would likely prove decisive and the game-winning-goal did not come until the final two minutes.

With Reinhardt back in the box for another holding foul, the Stars were defending well and won the puck back in their own end, but instead of clearing the danger and changing players, Elijiah Barriga and Philippe Sanche burst forward and put pressure on the clan net.

Sanche’s initial effort was saved but Barriga found himself in the right place to fire home the rebound and seal the win for the Stars, with just more than 90 seconds remaining.

Dundee saw out the remaining time and secured their first four-point weekend on the opening week of the season, as well as holding onto the top spot in Group A of the Challenge Cup.