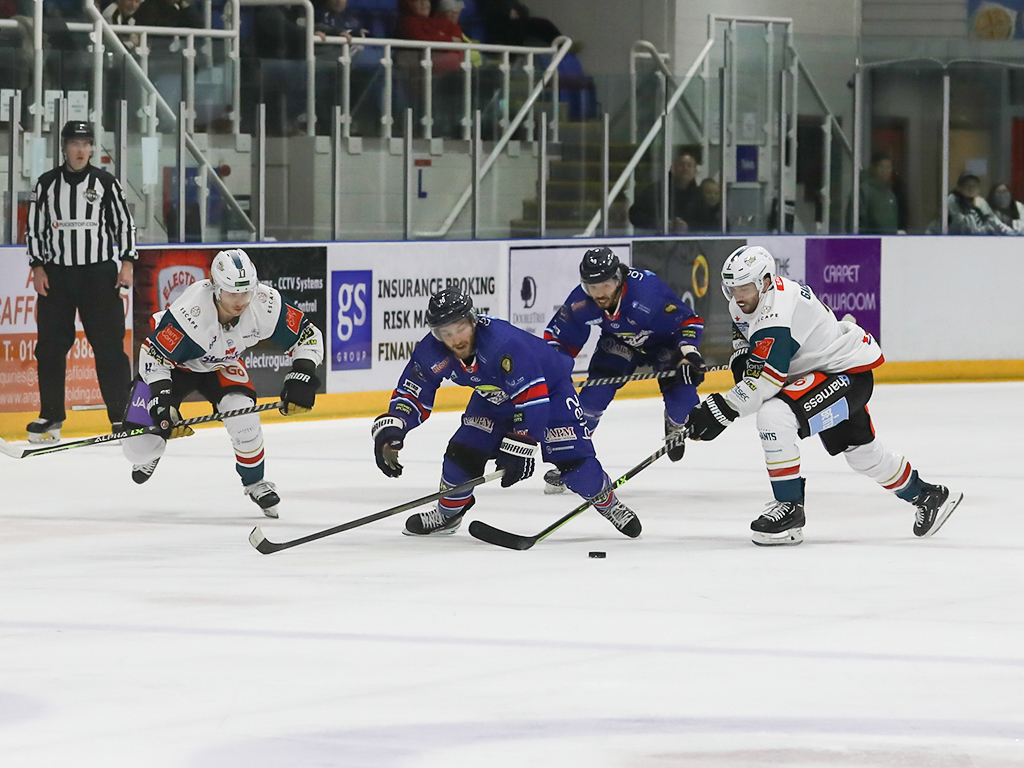 The Trade-Mart Dundee Stars were left still searching for their first league win of the season, after a high-scoring 40 minutes of hockey put waste to an evenly matches and scoreless opening period.

The Stars welcomed back defenseman, Kris Inglis and forward, Craig Garrigan back into the line-up but lost blueliner, Erik Näslund before the match, although with young forwards, Ben Brown and Jonathan McBean available, they would have a full set of forwards.

Dundee were the first side to be put under pressure as the Giants broke through on goal with a two-on-one advantage in the third minute, but Stars goaltender, Anton Svensson denied Scott Conway to stop the visitors opening up an early lead.

The match would still be in a deadlock as the game reached the halfway mark of the first period and shortly after the first powerplay of the night was awarded to Dundee as Belfast’s Chad Butcher tripped up Philippe Sanche as he capitalised on Butcher’s stumble and stole possession.

Although, after 90 seconds, the Stars powerplay was cut short as new signing, Ian Parker collided with Jackson Whistle, resulting in a two-minute minor for goaltender interference, but the game would still be without its first goal after each team’s initial powerplays.

The atmosphere and intensity of the match also turned a bit sour as the two teams began to play the physical aspect more and some hard hits raised the tempo, with Sanche dropping Giants defenseman, Gabe Bast sparking the heated tension. 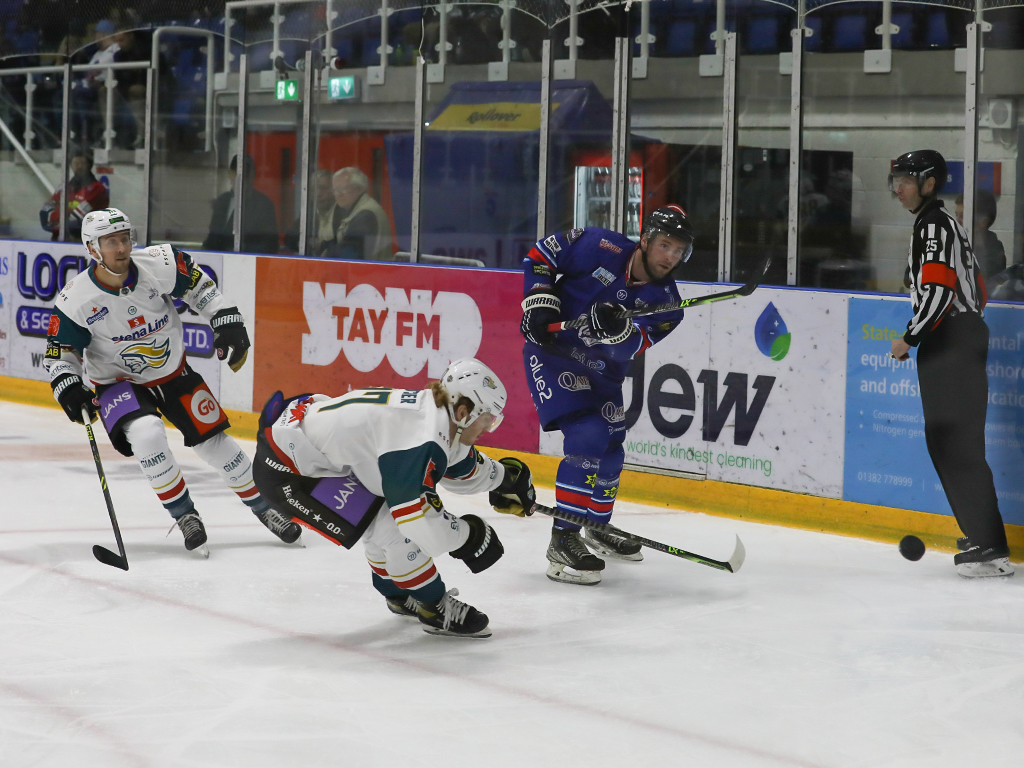 Despite a late penalty against Parker and another man advantage for the Giants, the first session ended goalless, but the second period would tell a much different tale, as Svensson was quickly called into action to deny Conway on a breakaway.

However, on 25 minutes, the stalemate would end as Mark Cooper’s shot beat the Swedish goalie between the legs and two minutes later, with the Stars down to four skaters, David Goodwin netted a second and turned Bast’s wide-of-the-mark shot, in at the back post.

The Northern Irish club continued to increase their chokehold on the match as just before the half-hour-mark, Cooper bagged his brace and shot home from the back door, after Bast won possession back for the Giants and found his teammate with a cross-goal pass.

Jeff Mason then called a timeout to settle down his Stars side and they would then get off the mark, with a powerplay goal in the 36th minute, as Sanche finished off a nice move and snuck his shot past Whistle at the back post.

However, as Dundee generated more momentum and came close to getting a second, the away team hit home a fourth in the final minute of the second, with Goodwin lifting his effort past Svensson, to make it 4-1. 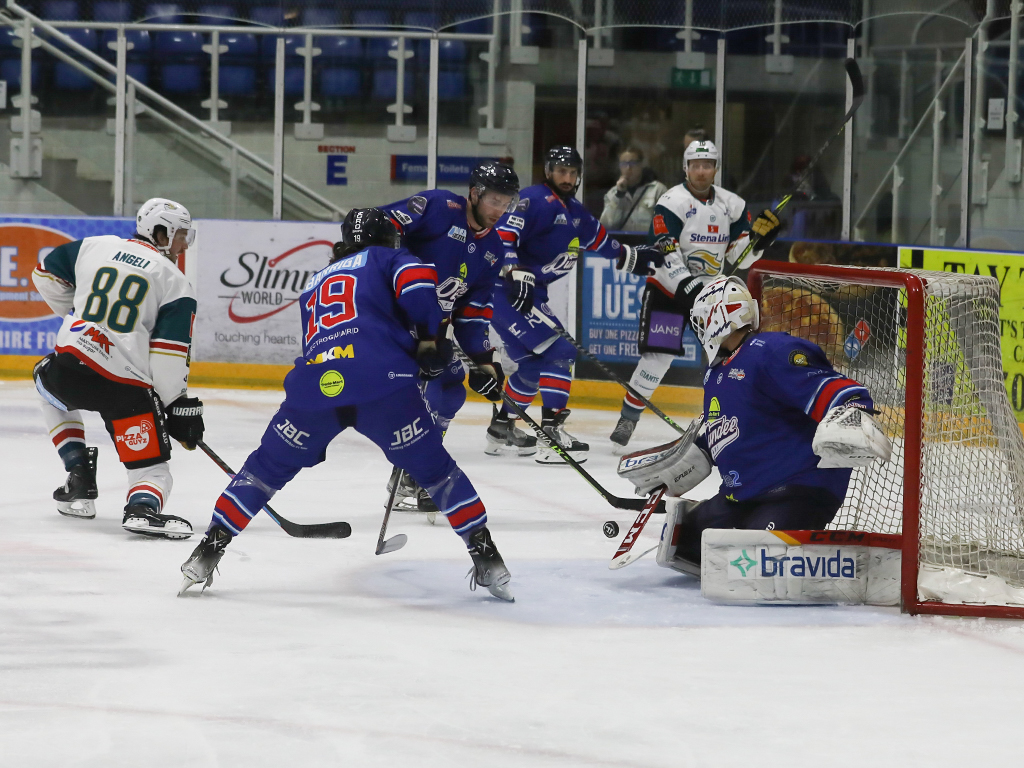 In the third period, Belfast quickly killed the game off as Sam Ruopp’s long range effort beat Svensson on 42 minutes, prompting a goaltending change for Dundee, but Brython Preece was given no time to settle into the match, as 10 seconds later, Conway made it 6-1, with a finish across goal.

Bast would then get his name amongst the goals inside 53 minutes to round off the scoring at 7-1 and end a miserable night for the Stars, who had put in a near-perfect display through the first 20 minutes.

However, they now have to regroup and ready themselves to face a strong Sheffield Steelers side, who come to Scotland off the back off a 5-4 overtime win against Manchester Storm, in Altrincham on Saturday night.