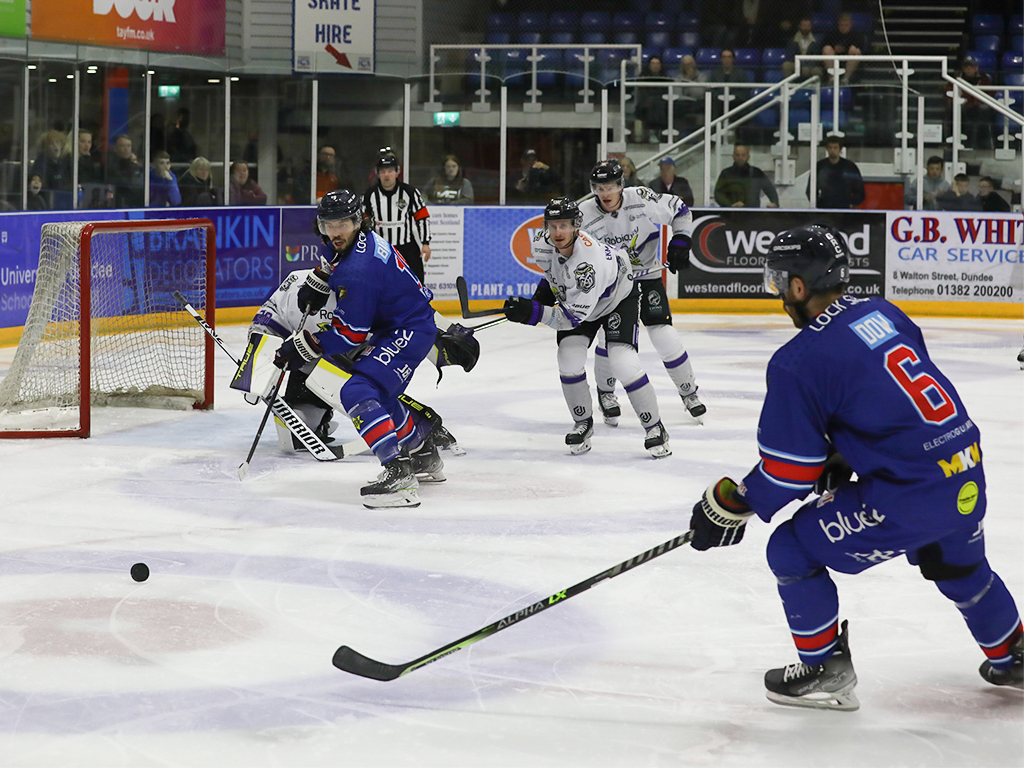 The Trade-Mart Dundee Stars hosted Manchester Storm on Saturday night in their first meeting of the new season and the Stars would claim their first point in the league standings, but lose the match in overtime.

The Stars had almost the same line-up from Friday’s trip to Nottingham as forward, Jonathan McBean was the only player to be taken out of the line-up as he travelled to Solway to fulfil his two-way contract.

After a slow start against the Panthers, Dundee got the quick start they needed and took the lead inside the opening three minutes.

A turnover at the Manchester blueline put Philippe Sanche through on the Storm goal, but Dallas Erhardt hooked the Stars forward when he attempted to shoot and that put the home side on the powerplay, after 90 seconds.

Whilst on the man advantage, Sanche was picked out at the back post by team mate, Romans Semjonovs’ cross-goal pass but the Canadian shot just wide.

However, just moments later, Sanche won back possession in the attacking end and quickly turned for goal, where he would beat Storm goalie, Hayden Lavigne with a rising shot over his right shoulder.

Despite conceding early, Matt Ginn’s men would have tied the match shortly after the restart, if not for a crucial block by Stars captain, Fabrizio Ricci that denied the second effort from Manchester that was goal bound.

Dundee netminder, Anton Svensson also did his part to keep his team in front with a number of key saves and the game went from end to end for the next 10 minutes, with the physicality between the two sides beginning to show via some hard hits along the boards.

As the first period neared its conclusion, the Stars would double their lead through Semjonovs, as he created a play from nowhere.

The Swede skated the puck out to the right side of the Manchester end and ripped an accurate shot through the smallest of gaps between Lavigne and the cross-bar, to make it 2-0 on 16 minutes.

Jeff Mason’s side held that lead through the first break and then rapidly added to it in the opening seconds of the second period, as Hugo Reinhardt slotted a low effort past Lavigne, after only 38 seconds had been played.

The hard-hitting, physical play continued and soon caused a boiling point, when Dundee’s Chris Gerrie collided with the Storm goalie, Tyson Fawcett earned himself a minor roughing penalty for knocking the Stars’ forward to the ground.

Despite the wasted powerplay, Dundee continued to dominate through the opening minutes of the middle session but the momentum levelled off after Manchester found their first goal of the night on the powerplay, with Scott Simmonds’ long-range effort slipping through traffic and past Svensson, after 28 minutes.

The tensions again flared between the two teams in the 29th minute, when after a stoppage in play, Fawcett charged at Stars forward, Carter Folk and that resulted in the pair dropping their gloves for what would be a long-lasting and bruising bout.

With the Stars still holding a two-goal lead heading into the third period, they needed another quick start to get some more breathing room again and after just four minutes, Elijiah Barriga provided just that.

A well-worked move around the front of the Storm net saw Sanche find Semjonovs, who then played in Barriga at the back post and the American calmly took it round the sprawling glove of Lavigne, to tuck home Dundee’s fourth goal.

Although, that goal did not kill Manchester’s hunger for a comeback and on 49 minutes, Michael Korol beat Svensson with a fine finish into the top right corner, to cut the lead back down to two.

Then, with the English side down to four skaters and killing off a minor penalty, Fawcett came up with a big shorthanded goal to make it a one-goal game.

After winning the puck on the Dundee blueline, Manchester’s Kevin Ekman-Larsson held onto the puck as he moved towards goal and waited until the very last second to slip the pass across to Fawcett, who pushed it home at back post.

Then, less than three minutes later, the visitors drew level as Dallas Erhardt shot Fawcett’s face-off pass straight into the right corner and that really shook up the Stars.

Suddenly, Dundee had the urgency they had been needing again, but they could not get back in front before regulation time expired and into overtime, they continued to dominate with several dangerous chances, but the Storm stood firm and when they got their one chance, they took it.

With Storm forward, Cole Carter skating the puck to the Dundee net, he got in too close and could not jam it home, but the on-rushing Jesper Orhvall arrived at the perfect time to lift in the winner, with only one-minute remaining.

A lengthy review of the goal, soon dismissed Mason and Dundee’s claims of a foul and the Storm were handed the extra point, but the one positive for Dundee was that they gained their first point in the league standings, ahead of next weekend’s home double-header of league action against, Belfast Giants and Sheffield Steelers.