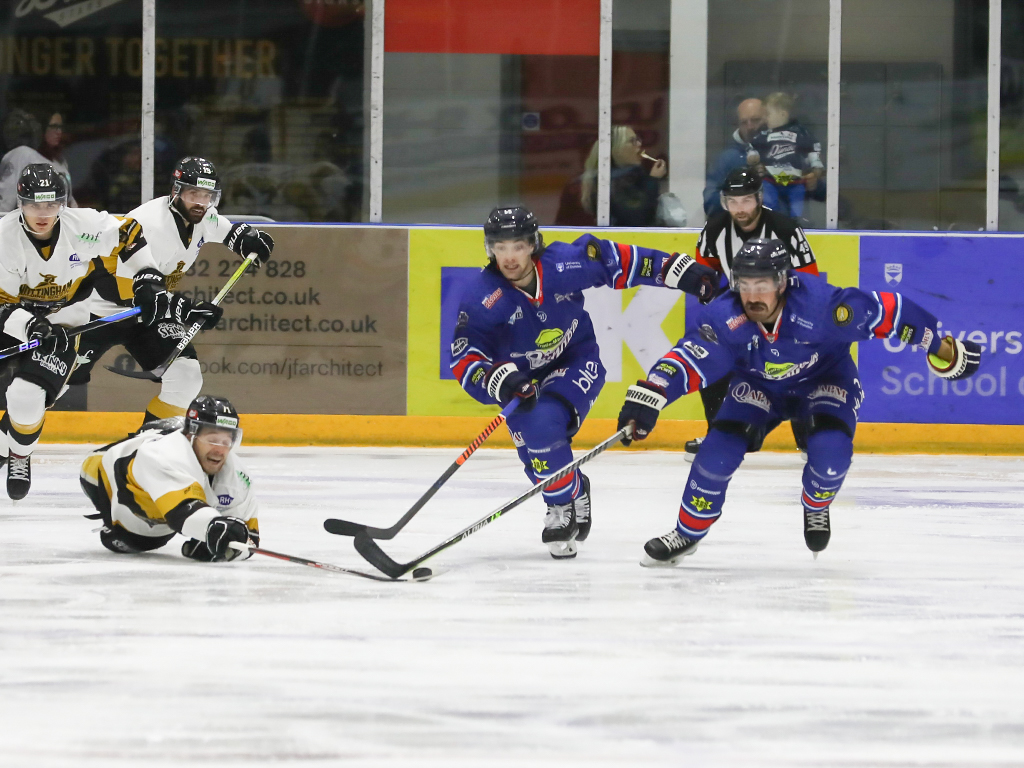 Alex Dubeau (Served by: Tanner Sorenson) 49:27
2 Abuse of an Official

The Trade-Mart Dundee Stars finally claimed their first league win as they produced a late comeback to defeat Nottingham Panthers at home on Friday night.

The Stars were without only two players for the visit of the Panthers, as defenseman Colin Joe joined forward, Ben Sokay on the injured list, but Jeff Mason still had a full line-up to ice as Ben Brown and Jonathan McBean filled in.

The first chance of the match went to the home side as Elijiah Barriga got through on goal and almost slipped his shot past Nottingham goalie, Alex Dubeau but the American forward saw his effort drift wide of the target.

Gary Graham’s side then a long spell of possession in the Dundee end and put the Stars defence under heavy pressure, although the opening goal would not come until nearly five minutes.

After the Stars nearly scored at the other end, as Ian Parker’s chipped shot looped over the net, the Panthers went up the ice and took the lead through David Levin, as he turned the puck past Anton Svensson in the 12th minute.

Dundee would reply quickly though, as two minutes later, Barriga converted a turnover in the Panthers end and sent his shot straight under Dubeau to tie the game.

That gave the Tayside team some momentum, but they were unable to take the lead before the end of the first period and in the second session, they soon fell behind again.

With the English side gaining the first powerplay of the night, it took the Panthers just six seconds to capitalise on their man advantage, as Jeremy Welsh was quickest to react to a dead puck at the right-side post and slotted it past Svensson.

However, the Stars Swedish netminder never lost any confidence and produced a few magnificent double saves to keep the deficit at one goal.

Dundee forward, Mac Howlett then went closest to tying the game once again, as his wrist shot beat Dubeau but rang off the iron post and away from goal.

There was also two powerplay chances for Mason’s men before the end of the middle period, but the visitors would hold their lead heading into the final 20 minutes.

The Stars went straight on the attack in the third stanza, with chances for Toms Rutkis, Philippe Sanche and Barriga all coming inside the opening five minutes, but none would find their way past the Panthers goalie.

However, the turning point of the match came in the 47th minute as Nottingham’s Dougie Lagrone launched an all out attack on Sanche and that earned him two minor penalties and put the Panthers down to four skaters for four minutes.

It only took Dundee 42 seconds to net the equaliser as Barriga deflected Ian Parker’s pass over the pads of Dubeau and less than two minutes later, Dundee took the lead.

Barriga netted his hat-trick as the Panthers defence scrambled around trying to block shots after their keeper was caught out of the net and the American slid home his third of the night, sparking mass appeals from Nottingham and Dubeau.

However, Dubeau was then ejected from the game for abusing the officials, forcing back-up Jack Berry to enter the crease cold.

The Stars were again on the powerplay as Dubeau received two, two-minute minors as well as his game misconduct penalty and that allowed Sanche to get in on the scoring and double Dundee’s lead to two-goals, in the 50th minute.

The Stars then defended bravely for the remaining 10 minutes to secure their first league victory of the season and now have to take that momentum into tomorrow’s Tayside Derby as they visit Fife Flyers.