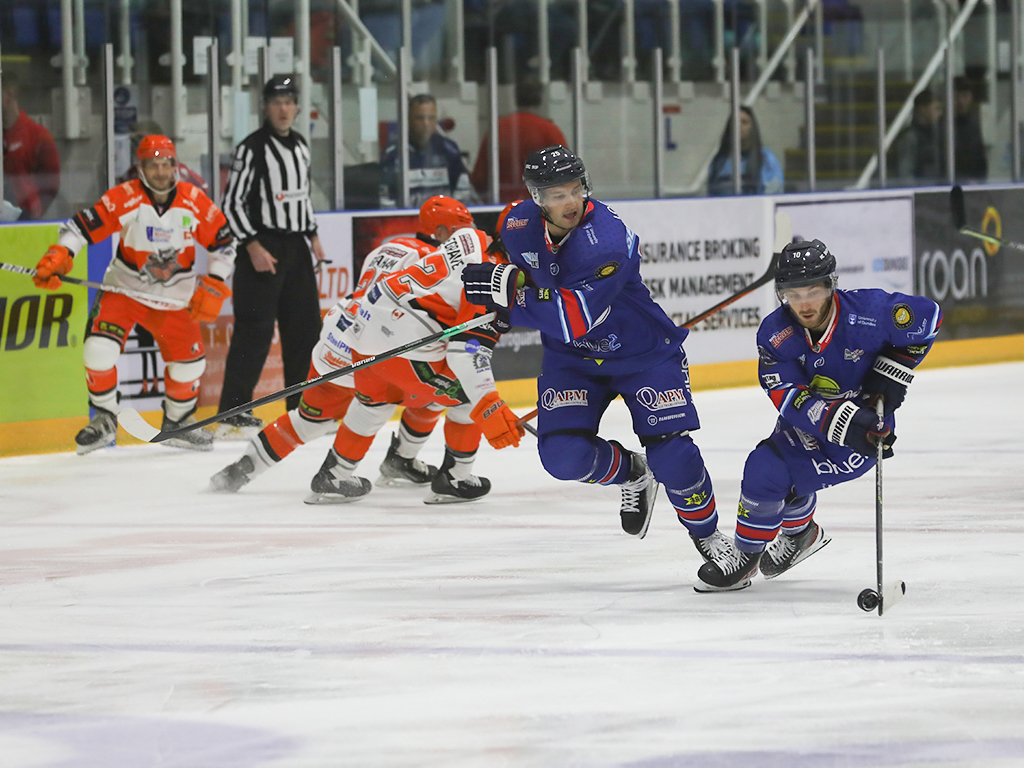 The Trade-Mart Dundee Stars were blown away in the third period by Sheffield Steelers, as the English club hit five goals in the final 20 minutes to turn a 2-1 lead into a 7-1 victory.

The Stars were down four players against a full strength Sheffield line-up, as Jonathan McBean was playing with Solway Sharks and Ben Sokay, Kris Inglis and Craig Garrigan all remained sidelined through injury.

The first period would be scoreless but there were a few dangerous opportunities for both teams, as Dundee created a few turnovers and tested Steelers netminder, Matthew Greenfield early, but the American denied efforts from Romans Semjonovs, Philippe Sanche and Toms Rutkis.

Aaron Fox’s men then also had to kill off a two-minute penalty against Tomas Pitule in the 12th minute, as the forward was punished for a slash, but the visitors survived and soon had a chance to take the lead when Brett Neumann utilised his pace to get in behind the Stars defence, but his shot was well held by Anton Svensson in the Dundee net.

With the game still in a stalemate, the second period saw that deadlock quickly broken as Daniel Ciampani’s effort snuck through the grasp of Anton Svensson, before trickling across the goal line to give the Steelers the lead, just 52 seconds into the middle session.

However, the game was soon tied again as 30 second later, Romans Semjonovs provided a swift response for Dundee, with the Swede picking out the top corner of Greenfield’s goal from out on the right flank.

Although, on the 25 minute mark, Sheffield regained their lead as Martin Latal won possession back before finishing high past the Stars netmidner from the edge of the crease.

Jeff Mason’s men continued to fight hard for a second equaliser but the game became a lot slower and much more physical thoughout the second period.

Heading into the third session, the road team held thier one-goal lead but soon turned it into a massive advantage, as 72 seconds in, Brett Neumann beat Svensson with a quick shot from close range and then, seven minutes later, he bagged another as he shot a loose rebound into a wide-open net.

Although, the Steelers did not stop there and straight from the face-off, Tomas Pitule beat Svensson with a high shot, just eight seconds after the restart and thta prompted Jeff Mason to switch his goaltenders, with Brython Preece playing out the remaining 11 minutes.

With Dundee’s Erik Näslund in the penalty box for a tripping foul, Scott Allen then turned home a sixth goal on 54 minutes and then, Sebastien Piche compelted the scoring at 7-1, just 39 seconds later.

The clock slowly ran down for the Stars and eventually their weekend was over, with just one win to show from three games.

Although, a Challenge Cup double header against the current holders, Belfast Giants is up next and there is a chance for the Stars to clinch the top spot in Group A.