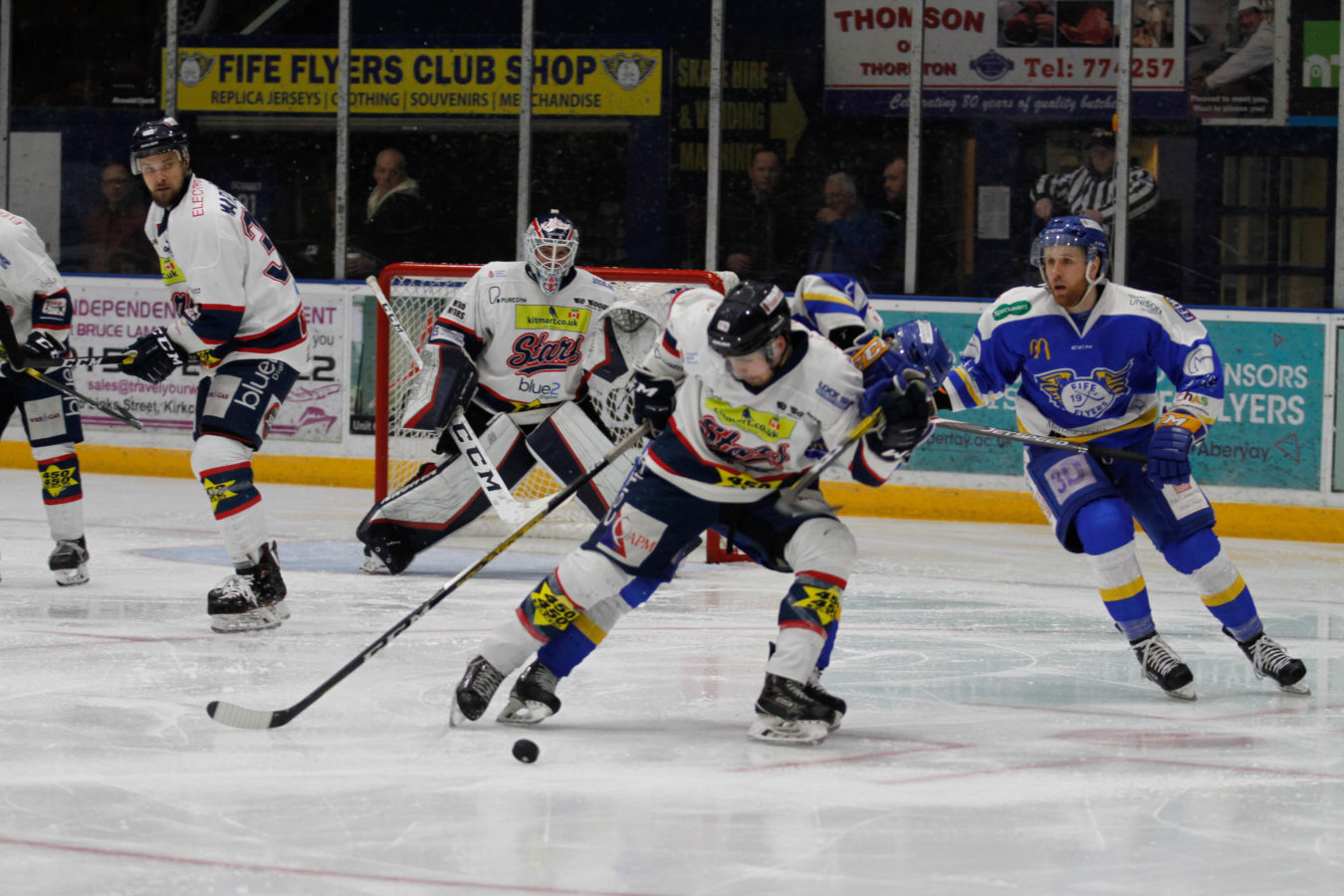 The Kitmart Dundee Stars are on the road to Fife Flyers tonight and they are hoping to complete a clean sweep of victories in Kirkcaldy this season.

A fourth consecutive away win over the Flyers can also lift the Stars back into the playoff places, depending on other results.

However, the other teams in a battle for a playoff spot face-off each against each other as well over the weekend.

Glasgow Clan host Manchester Storm on Saturday before the Storm welcome the Flyers on Sunday.

This season, Dundee have claimed the first three ties in Fife and have outscored the Flyers 11-5 in their own arena.

In the last Tayside Derby at the Fife ice Arena , it was a 4-1 victory for the Stars as Kevin Dufour, Matt Carter, Brett Stovin and Drydn Dow all found the net, while Mike Cazzola bagged the home team’s lone goal.

The Stars are currently in ninth position in the Elite League standings and have 32 points from 40 games, seven more points than Fife, who have played the same number of matches but bring up the rear of the table.

Omar Pacha’s men have won five of their last 10 games and beat Glasgow 3-2 on penalties in their last outing.

Dundee were missing both Alex Schoenborn and Kris Inglis from their line-up but Inglis is close to making his return after a lengthy spell on the side-lines.

Whereas, Todd Dutiaume’s Flyers have lost 14 matches on the bounce and their last win came back in December 2019, as they won 3-2 in overtime away to Manchester.

After losing their last fixture 2-0 in Nottingham to the Panthers, that brought their total goals conceded to 57 during this slouch and their offence has conjured up just 25 goals in the same period.

Carlo Finucci did not ice against Nottingham and defender, Sam Jones will miss Saturday’s match as he picked up a one game suspension for an elbowing foul against the Panthers.

Looking ahead to the weekend, Stars Head Coach, Pacha said: “We want to prepare for Fife as well as we can, obviously they are going to be hungry because they need a big win.

“So, we will have the same mindset as last week and we want to keep our good road form going after that big win in Glasgow and that is something we want to build on for these last seven road games.

“It will be a massive rivalry game and this week we will work again on the same things, so our structure, how we play in the neutral zone and defensively but we have to make sure we still create offence too.”

The Canadian coach also wants his side to find some consistent form away from home after a big win on their last road trip.

Pacha added: “If we play the same way we did in the last game then it will always give us a chance to win hockey games on the road.

“We want to win on the road and we have to if we want to make the playoffs.

“So, it is important that it continues on Saturday, so that we create the same energy and the same jump offensively but we also must make sure we are really aware around our net and play well defensively.”

After winning all of their matches in Fife on this campaign, the Stars boss knows a good start is key.

He said: “Well in Fife, we are three in three this season and we have had a lot of success in that building.

“But we have to keep the same mindset because every time we have played there this year, we have had a really good start – which is key.

“So. I think that is important to quieten their fans and get ours going early in the game but also to make sure we push right until the very end.

“It is going to be a massive game, obviously it is huge for Fife but for us also because Manchester and Glasgow are playing each other, therefore someone will pick up points, so we want to keep ourselves closer to both of them.”

If his side can get a win then it will be the first time they have completed a clean sweep of victories in the FIA during the Elite League era.

Discussing what an accomplishment it would be, Pacha said: “It would be huge, we have been through our ups and downs and now they are in a down but we put ourselves back in a good position.

“We have made a huge comeback to be within striking distance of a playoff spot by winning our games in hand that we had against the other teams around us,

“So, it would be a huge accomplishment to not only sweep them on Saturday but to keep moving up the standings.

“If we do well this weekend, then we are going to be in the top eight on Monday morning.”

Face-off time for Saturday’s match in Kirkcaldy is at 7:15pm.