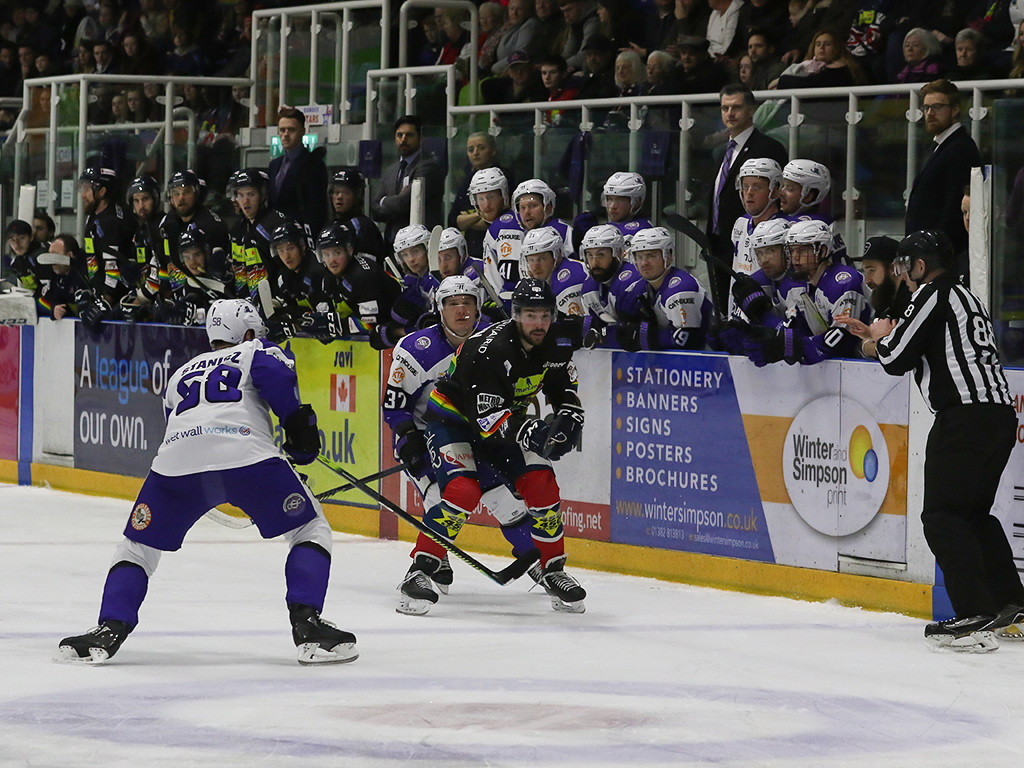 The Kitmart Dundee Stars have only one game this weekend and it is a key match in their playoff push, as they are away to Glasgow Clan on Saturday night.

The Stars come into the match with a bounce-back feeling as they are aiming to respond from defeat in their last outing.

A short-benched Dundee side were unlucky not to get on the scoreboard last Sunday, as they were shutout by Manchester Storm 3-0 in Altrincham.

Meanwhile on the same night, the Clan snapped a six-game losing streak with a 3-2 victory against fellow Scottish rivals and bottom of the league, Fife Flyers.

Rasmus Bjerrum, Matt Beca and Mac Howlett netted for Glasgow, but they slipped back into losing form on Wednesday as they were shutout 4-0 in the Challenge Cup Semi-Finals and eliminated by Sheffield Steelers.

The Clan have also had injury troubles but goaltender, Patrick Killeen made his return to action on Wednesday but Head Coach, Zack Fitzgerald decided to put himself in the line-up as they are still missing four players,

The Tayside team also have a few injuries as Head Coach, Omar Pacha confirmed earlier this week that both defenseman, Kris Inglis (upper body) and winger, Alex Schoenborn (lower body) will not be available for Saturday’s match.

Whereas, defender Reilly O’Connor is considered day-to-day and may recover from his upper body injury in time to be cleared for action.

So far this season there has been seven ties between the two Scottish sides and the Stars have won four of them, the Clan two and one cup quarter-final leg ended in a draw.

Anthony Beauregard has the most goals for Dundee against Glasgow with five, while on the opposite side, both Scott Pitt and Roy each have scored three times against the Stars.

The two teams last met just a week ago, as the Clan came to the Dundee Ice Arena but weren sent home pointless after losing 6-3.

Beauregard, Drydn Dow, Craig Gans, Kevin Dufour, Brett Stovin and Matt Carter all found the net for Pacha’s side, while Beca, Pitt and Craig Peacock lit the lamp for the visitors.

Glasgow had led 2-0 but the home team were 3-2 after two periods and after the Clan tied the game, Dundee powered on to re-take and extend their lead.

Looking ahead to their only match of the weekend, Pacha said: “Road games are very, very important and they are going to be defining our season right now.

“We still have seven home games left but our next two are on the road and against big rivals in Glasgow and Fife.

“But we have to make sure our away form is up to par for the next few games and sometimes winning on the road is very difficult.

“It is never easy but I would rather we did the hard job now and then use our home ice to our advantage.”

The Canadian coach also hopes his special teams will be affective after stalling against Manchester.

Pacha added: “At this time of the year, we are going to be in a lot of tight games, so we have to make sure we are still playing efficiently at the back.”

“Our special teams will also have to do well, I thought against Glasgow last week, our penalty kill was very good and I know we conceded but it was okay and there are still areas of our powerplay that can be better.

“Obviously in Manchester it wasn’t very affective but it has been good at times this year and we just want to make sure that it picks over this last 15 game stretch.”

Dundee forward, Craig Garrigan also knows how crucial this weekend’s match is for the team.

He said: “After the disappointing result on Sunday the boys are eager to get back in the win column.

“Also with it being at this stage in the season it is crucial to get a win this weekend to stay in this playoff push.

“Plus, with it just being a one game weekend for us it let’s other teams play their games in hand, so this game is huge for us to get the win.

“Also the fact that we are just behind Glasgow is important, as it works out as a four-point swing.”

The 21-year-old also doesn’t think that their recent victory against the Clan will make things easier for them on Saturday.

Craig added: “I wouldn’t say it would be easier to play against Glasgow this weekend but I feel like we do match up well against them and have had good performances.

“But one thing we’ve learned this year is that we shouldn’t take any teams lightly and despite Glasgow having a bunch of injuries last week, we learned that in the first period.”

Saturday’s match in Glasgow will face-off at 7pm.