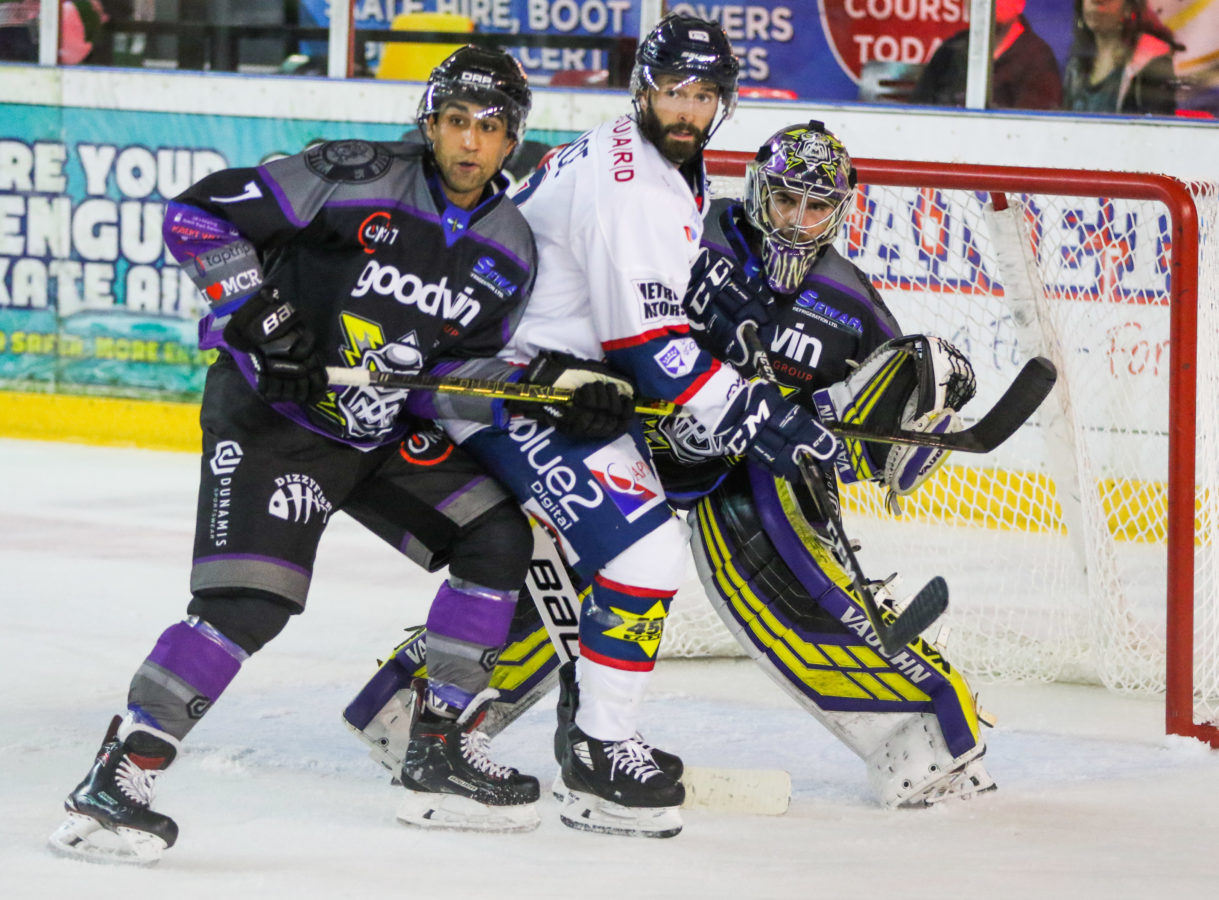 The Kitmart Dundee Stars visit Manchester Storm on Saturday night and are aiming to extend their unbeaten run to six games.

The Stars can also add to their four-match-winning streak in the league and move back into the top eight, as a four-point weekend could move them up from ninth, to as high as fifth.

Dundee will also go in search of their first win of the season in Manchester and they can also put some distance between them and the Storm who sit bottom of the table.

Manchester lost 5-4 in their last game, which was at home to Nottingham Panthers and that kept them two points behind Dundee.

After losing 3-1 in the first match, which was south of the border, Omar Pacha’s men responded with two wins on home ice against Ryan Finnerty’s side, beating them 5-3 and 4-3.

However, Manchester’s dangerman, Tyson Fawcett has three goals against Dundee this season.

Dundee have some players who are in hot-from during this good run and in the last match the Stars beat Coventry Blaze 7-3, with a few players having a high-scoring night.

Anthony Beauregard scored one goal and setup three others last Saturday, while Dufour and Jordan Cownie scored twice and assisted once.

However, Dundee will be down one player as defenseman, Kris Inglis has been ruled out of action for this weekend with an upper body injury that he sustained last week.

The Stars head coach is pleased with how his side have played during their good run of form but also wants his side to continually improve if they are to get back up into the playoff spots.

Pacha said: “We just have to keep playing good hockey, in the last five matches you can see we really picked up our game and we had great goaltending and our defence really stepped it up.

“We are also creating a lot more offence, which is nice to see but hockey is a funny sport that is all about creating momentum and we just have to keep it going.

“I still think we have to be a bit better defensively, it is great that we are still winning games but we still have to improve and at the end of the day, other teams are also getting better, so we have to make sure we keep improving and build on the last game.

“Our special teams have also been a lot better, so it is all about maintaining this because we have been through streaks where we have lost four or five games in a row and now we haven’t lost in five, so it is important to keep this momentum going and to realise what makes us successful and to keep applying it whenever we can.”

Looking ahead to Saturday’s game the Canadian coach added: “Manchester is obviously a tough rink to play in but simply we just have to get something out of there.

“We know everything happens so quick down there, so we will prepare the best we can for that game and we can hopefully use this as a game to get us closer to that pack in the middle of the standings.”

The Stars boss also stressed the importance of extending their run and making a good start to December.

Omar said: “I think the last three games at home have been really successful, Manchester wasn’t our best game but we found a way to win, against Glasgow we played a really solid home game and against Coventry that was a very exciting game for the fans, so we are giving them something good to watch.

“We just have to keep this run going and hope to get results at home because we have a busy December and we want to kick off the month with a positive mindset and win.”

Dundee Stars forward, Brett Stovin is expecting the Stars to do better when they return to the Storm Shelter this weekend as he hopes their new style of play can work better on Manchester’s narrow ice.

He said: “I think now that everyone has been there, we know what to expect going in.

“It is definitely a different feeling going down there now but we have been playing a different style of game recently and that might actually swing towards that type of ice a little better.

“The style we have been playing on our home ice right now, is kind of the style you want to play when you go to Manchester.

“Before we were playing a spread-out game but we tightened things up a little bit and started throwing pucks to the net and crashing the net in the last five games and that’s how we have scored and won matches.”

The Canadian also wants to see the Stars climb back up the table following their early season slump.

Stovin added: “We showed at the start of the year that we can be one of the best teams in the league and then we went through a little slump.

“You are bound to face these slumps at some point, ours just happened to be at the start of the year, where we ended up bottom of the standings but now it is time for us to climb back out.

“We just have to keep playing the hockey we are playing right now, stay positive and hopefully that will be our only slump.”

Face-off time for Saturday’s away game is at 7pm.