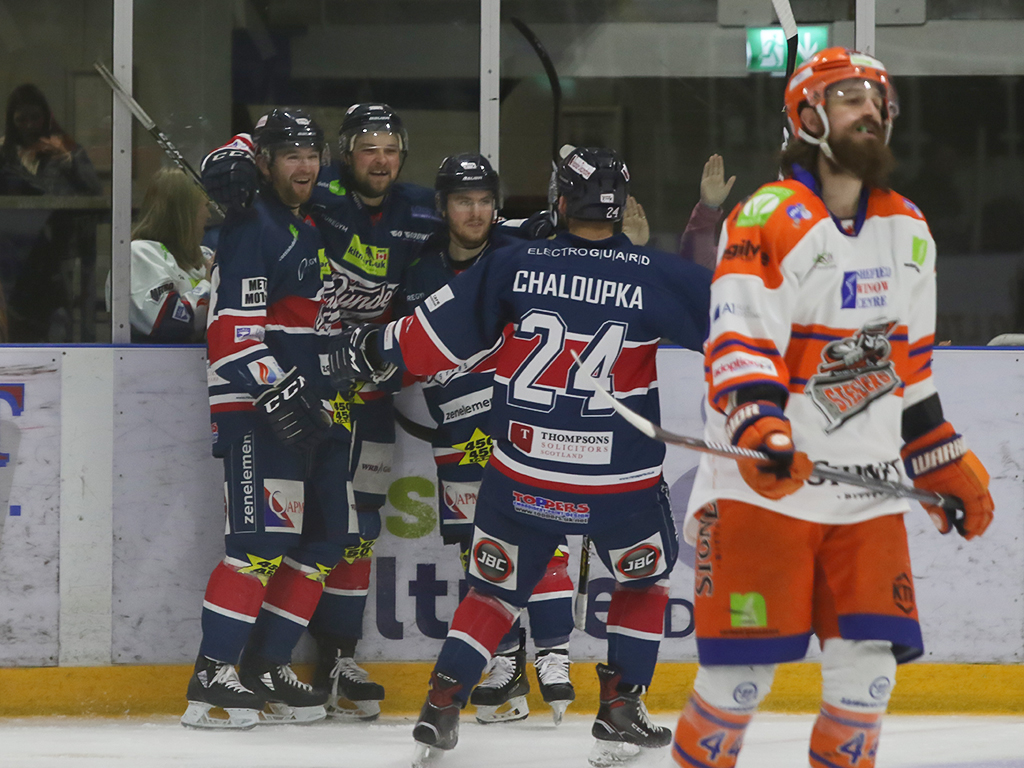 The Kitmart Dundee Stars have a chance to avenge last month’s overtime loss at the hands of the Sheffield Steelers as the Yorkshiremen return to the Dundee Ice Arena on Sunday.

Sheffield travel to Tayside looking to strengthen their position in the Elite League table, which is currently third.

Whereas, the Stars sit in seventh and are trying to get back in the win column in front of their own fans.

They have some extra motivation to beat the Steelers after they were narrowly beaten in overtime, four weeks ago.

After trailing 4-1 in the second period, Dundee pulled the score line back to 4-4 before having to tie it up again, late in third session.

However, a controversial penalty was called against the home side and with the extra skater on, the Steelers stole the extra point in overtime.

The Yorkshire club were beaten 3-2 at home by the current Elite League Playoff Champions.

Last night in Kirkcaldy, the Steelers made an excellent start to their double header away in Scotland. They comprehensively beat Fife Flyers 10 – 3.

Stars forward, Duncan Speirs highlighted how motivated the players are to get back at Sheffield after a frustrating loss in extra-time.

He said: “I would say we are really motivated, obviously they stole it in overtime, but we are definitely due them one this time and I think we will win it.

“Going 4-1 down wasn’t great but a great team effort helped us pull it back in the third and I think we will definitely compete with Sheffield this year.”

Speirs also stressed how important it is to win their home games and to secure points early in the season as that will all matter come April.

Duncan added: “It is massively important to win your home games, especially early in the season and every set of points are important for counting towards that playoff push.

“We just have to stick to the systems, outwork them and keep it simple.”

On Thursday night, Dundee came out on the wrong end of a 14-goal thriller at the Viola Arena and they lost the lead four times before going behind in the third period.

Elgin Pearce’s shorthanded goal had Dundee ahead but Mark Richardson tied things up before the first break.

Two quick goals from Drydn Dow and Pearce put the Stars 3-1 up before the Devils hit back to tie the game through Sean McMonagle and Matias Sointu.

The Taysiders went 5-3 upright before the second break as Kevin Dufour and Justin Maylan found a way past Ben Bowns.

The third period saw the home side tie the game again as a Matt Pope double put the score level at 5-5.

Dow bagged his brace to make it 6-5 but Gleason Fournier had the match tied again, less than a minute later.

Stephen Dixon gave the Welsh club their first lead of the game in the 53rd minute before Matthew Myers’ shorthanded and empty net goal sealed the win for Andrew Lord’s men.

The Stars will have benefited from two days of rest and a training session on Saturday to get the legs going after the long trip to Cardiff and back on Thursday.