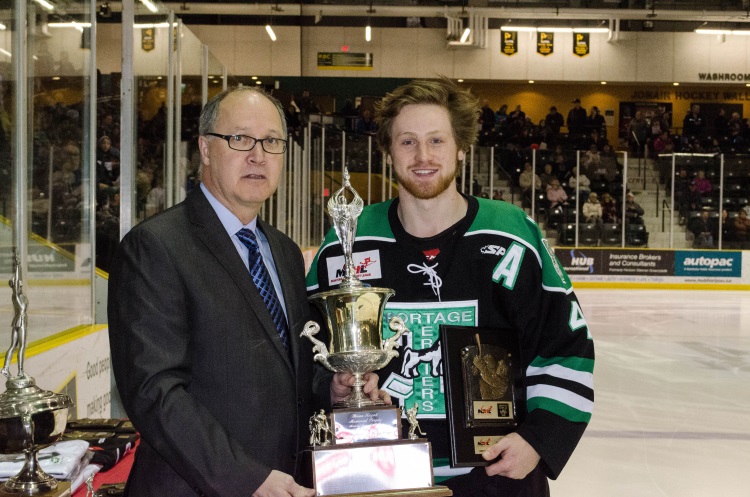 The Kitmart Dundee Stars are delighted to confirm the signing of defenseman, Brett Orr for the 2020-2021 Elite League campaign.

The 24-year-old, left-handed defenseman has put pen to paper on his first professional contract and will bring a high compete level to the Stars roster when he arrives for the new season.

Orr joins from American club, Bentley University Flacons, where he spent the past four seasons competing in the NCAA (National Collegiate Athletic Association).

Brett was the Falcons co-captain last season and was named to the Atlantic All-Academic Hockey Team in all four of his years with the team from Waltham, Massachusetts, which is near Boston.

The 5’10” blueliner has also previously played in the Manitoba Junior Hockey League for three years and prior to that he played two seasons in the Manitoba Midget League.

The native of Elkhorn, Manitoba has also won two MJHL titles and a national championship with Portage Terriers and won a gold medal at the World Junior Challenge A competition as part of the Canada West Under 19’s team.

Stars General Manager and Head Coach, Omar Pacha is excited to have Brett join his roster for next season and speaking about his new signing, he said: “What I like about Brett, is his compete level.

“He was a co-captain last year at Bentley University and at Bentley, they have had a guy like Brett Switzer before, who was a great player for the Stars, so I am sure he had some words with Orr about Dundee.

“He is a great leader, a true professional and on the ice he skates very well but he is also very good in one-on-one situations and he rarely gets beat.

“Brett plays like a bull and that’s what we maybe missed at times last year, the fact that he wants to play hard and we want to be a team that plays hard.

“He also has the ability to join the rush and contribute offensively, so he is a really good two-way player but I love that he has a really high compete level.”

The Stars boss also spoke about the defender’s character and off ice attitude.

Pacha added: “The feedback I got from other coaches that had worked with Brett in the past, were all excellent.

“He is just a great human being and he wants to do everything right every day.

“Brett is a competitor and that is what we are looking for in our defensive core, a guy that is really hard to play against and he is probably going to be a great penalty killer for us.

“It is good to get in a d-man that plays hard, plays with high intensity and has strong attributes as a leader and I think he will make a great addition to our team.

“He is defenseman, who is not the biggest but has that really high compete level, which I think gives him that edge.

“I think he is a guy that will transition well into pro hockey and he is really hungry to come in and make an impact in his first year but even though, he is a young defenseman, I don’t think he will take long to adapt to the Elite League.”

After signing his first professional contract, a delighted Orr said: “I am thrilled to be joining the Stars!

“With Coronavirus ending my college season in March, I didn’t know what my plan would be.

“I actually read back in January about a bunch of Canadians going over to the Elite League and I thought that was great opportunity and when I talked to Omar, he had nothing but good things to say about the organisation.

“He said a lot of the things I wanted to hear, especially culture-wise, how the team plays and how it’s a team-first mentality and we are going to do whatever we need to as a team to win, rather than just have a few guys carrying the load.

“He also mentioned about how he focuses on players and their on-ice abilities, plus their off-ice attitudes and I just thought that was the perfect way to go about it.

“Teams that succeed the most are usually filled with players, who not only have those abilities on the ice but those abilities to make a difference in the communities around them.

“After explaining how great of a city Dundee is and Scotland too, that part was pretty easy to sell me on, but once he explained how the team is run, the culture and how he likes to operate his organisation, I thought it was a perfect fit for me.”

“Along with that, Omar came across as a great guy, very humble and super excited about the team, which also drew me towards Dundee but I just couldn’t think that there would be a better opportunity for me at this point in my life.

“Also, my family’s heritage is from Scotland, although I think we are more around the Glasgow area.

“But it just seemed like the perfect chance to go and see a great country, play in Dundee and get the opportunity to play professional hockey at such a high level too.

“So, I am really thrilled about this opportunity!”

The defender didn’t know too much about the EIHL before speaking with Pacha but did find a way to hear about other players experiences in the UK.

Brett said: “I didn’t know a lot about the Elite League until I read that article but I had heard of some of the bigger teams like Belfast and Nottingham.

“But once I really started getting into discussions, one of your former players from last year, Brett Stovin, who is from just outside Winnipeg, Manitoba, played with a couple of my buddies from over here.

“Then, a former Bentley player, just coincidently enough, his name was also Brett but it was Brett Switzer and he played in Dundee four years ago.

“So, I got in contact with him as well and he said the exact same, he loved his experience there and didn’t have any troubles and that’s where I got all my know how and word about the league and it was all very positive.”

Brett’s career started back in 2011, when he was playing with the Yellowhead Chiefs Under 18 team in the Manitoba midget leagues.

In two seasons with the Chiefs, the 181lbs Canadian accumulated 23 points (5 goals + 18 assists) after playing 91 games.

Then, the defender moved on to play with Portage Terriers in the MJHL between 2013 and 2016, becoming an alternate captain in his final year.

In his first year with the Terriers, Brett made the All-Rookie team and the followed it up with back to back league championships in 2015 and 2016.

Orr was also on the Portage team that won the RBC Cup in the 2014-2015 season, which was the national championship for all of Junior A leagues in Canada.

His final year in the MJHL was topped off with being picked as the winner of the ‘MJHL Top Defenseman’ award, a place in the First All-Star team and their second league championship, all before winning gold with Canada that summer.

After three years in the junior leagues, Orr had played in 185 matches and collected 110 points (33+77) for the Terriers, but also 93 penalty minutes.

Then in 2016, Brett committed to Bentley University for the next four years and last season, he scored four times and assisted on a further 10 goals in the curtailed 35-game season.

Over the course of his four years in the NCAA with the Falcons, he iced on 139 occasions and racked up 54 points (8+46) and picked up 38 penalty minutes.

Therefore, in his career so far, Orr has featured in 419 matches, scored 47 goals, assisted 141 times and has collected 169 penalty minutes.

Brett is our fifth signing of the summer and joins Craig Garrigan, Anthony Beauregard, Connor Sills and Michael Poirier on the roster for next season.

You can get your season tickets to watch these five players and the rest of the team in the 2020-2021 campaign by contacting: [email protected]

Featured Image from: Game on Hockey 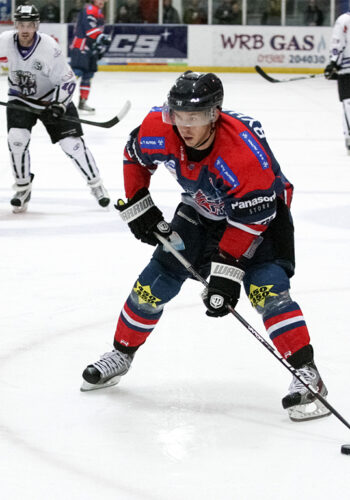