STATS OF THE STARS – WEEK TEN

The Kitmart Dundee Stars were involved in another two tight matches last weekend and this article will look at some of the standout statistics for the last two matches and for this weekend’s upcoming games.

The Stars started off last weekend with a trip to Glasgow to face the Clan for a fourth time this season and despite holding the lead after the first period, they slipped to a 3-2 loss in Braehead.

That was Zack Fitzgerald’s first win against the Stars as a coach and the Glasgow side’s first time of prevailing over their Scottish rivals in this campaign.

Kevin Dufour netted his third goal of the season against the Braehead side on Saturday and Colton Kroeker scored again against Glasgow to make his record, two in the last two ties.

On Sunday, the Cardiff Devils came to Tayside and after suffering defeat in Fife on Saturday, Andrew Lord’s men were there for the taking.

However, the Stars fell behind but would push the reigning Elite League Playoff champions until the very end when Cardiff secured the two points with a late powerplay goal.

Kroeker scored the Stars first of the evening to start his point streak with a second goal in two games before Drydn Dow converted his penalty shot.

Dow is just the second Dundee player to take a penalty shot in this campaign and he is the only one to score after Justin Maylan was unable to beat Matt Ginn in Manchester back in September.

The Devils’ Stephen Dixon, Sean McMonagle and Matthew Myers each scored for a second time against Alex Leclerc this season.

Right up until the dying moments of the match, Omar Pacha’s penalty killers were going for three straight games without conceding a powerplay goal but Joey Haddad’s strike inside the final two minutes killed that stat.

The Stars had however, killed eight penalties in a row over the last three matches and their penalty killing success rate now sits at 75.9 per cent in all competitions.

Dundee have been shorthanded 83 times in 21 matches and have killed off 63 of those penalties.

There has also been small changes to the Stars statistics leaders over the past week but some players have caught up with some of last week’s leaders.

Such as Elgin Pearce, who has now matched Dufour’s six goals and 13 points in the league while Maylan has equalled Jagger Dirk’s 12 assists in all competitions.

Meanwhile, Leclerc made his 400th save at the weekend in the match against Cardiff and has now stopped 402 shots in 15 league games, giving him an average of 26.7 saves per game.

Whereas, the Stars skaters have now hit 550 shots on target for the season and they have scored 67 times but that gives them a conversion rate of just 12 per cent.

The aforementioned Kroeker is the only player with a point streak heading into week 11 of the regular season, due to the Canadian scoring twice in the previous two games. 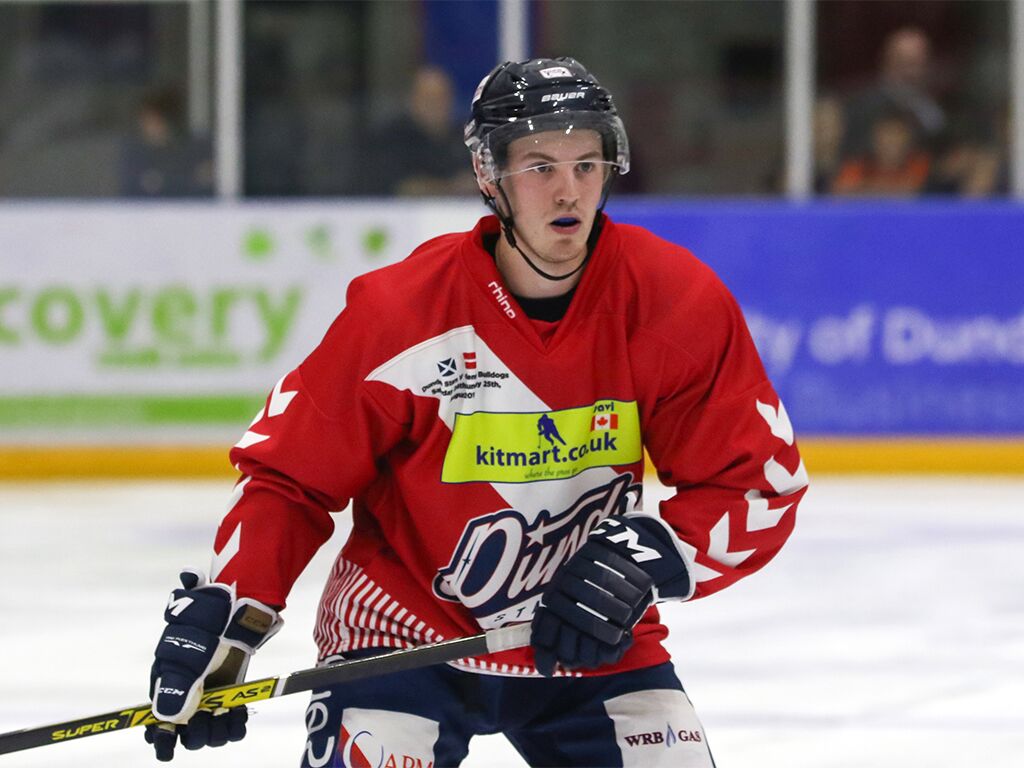 This weekend’s fixtures kick-off with the Stars hosting the Manchester Storm on Saturday night and the last time Ryan Finnerty brought his side north of the River Tay, they were sent packing with zero points.

Dundee powered to a 5-3 victory and it was a victory the players wanted badly because of the 3-1 loss they suffered in Manchester back in the early weeks of the new season.

Both games have been close encounters that went down to the wire with the final moments being quite nerve racking for both sides.

Pearce netted the Stars’ only goal at the Storm Shelter, while Dufour (2), Egils Kalns, Anthony Beauregard and Matt Marquardt found the twine in the home victory.

The Storms scored three powerplay goals at home and Tyson Fawcett bagged two of them before Cameron Critchlow added a third, while, Scott Simmonds, Layne Ulmer and Dallas Ehrhardt were the three lamp-lighters for the Altrincham outfit at the Dundee Ice Arena.

From the pair of previous two games, Dundee have put 61 shots on Manchester netminder, Ginn, beating him six times – which gives the Canadian a save percentage of 90 per cent.

Whereas, Finnerty’s men have had 68 shots and have also beaten the goaltender six times, which gives Leclerc a stopping rate of 91 per cent. 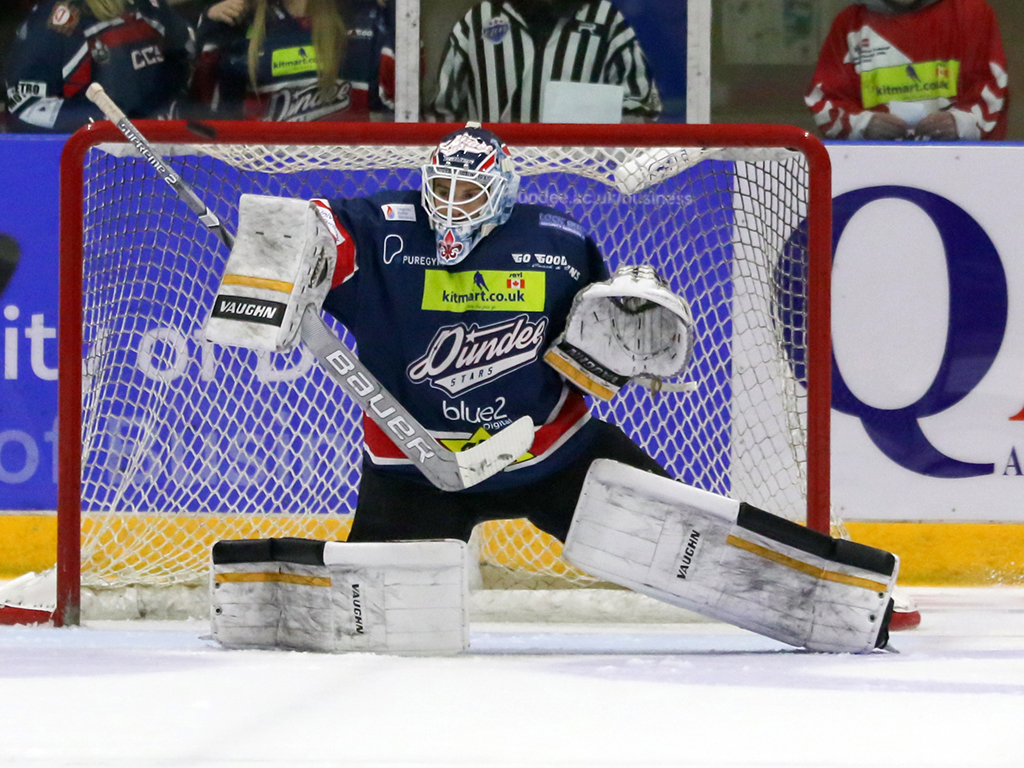 Against the Storm, Dundee have a powerplay percentage of 16.67 per cent and a penalty kill success rate of 54.55 per cent.

The second match of the weekend takes the Stars across the Tay Bridge for another clash with their arch rivals, the Fife Flyers.

On their only previous visit to the Fife Ice Arena this season, Dundee came away 4-3 winners in another tight contest after they had lost out in another narrow game a few weeks earlier as the Flyers claimed a 2-0 victory at the DIA.

The names in the Dundee column of the scoresheet are very familiar as Dufour (2), Marquardt and Dow all found the net in Kirkcaldy

Although, the Flyers have had different scorers for all their goals against the Stars this season, Chase Schaber and Danick Gauthier beat Leclerc in Dundee before Carlo Finucci, Mike Cazzola and Tim Crowder scored in their own building.

Dundee have had 60 shots against Fife but only four have beaten Adam Morrison in the Flyers net and the Canadian impressed in his first local derby by saving all 42 of the Stars shots.

Combined with his numbers in the second game, the Canadian holds a save percentage of 93 per cent against Pacha’s men.

Todd Dutiaume’s side have managed to put 58 shots on Leclerc but only five have squeaked past the 24-year-old, therefore he has a shot-stopping score of 91 per cent.

Against the Flyers, Dundee have a powerplay scoring percentage of 27.27 and a 100 per cent penalty killing record.

Face off time for this Saturday’s home game against Manchester is at 7pm. Tickets can be purchased HERE!

Thanks to www.starsstats.co.uk/ which was created by Dave Sweetin and Elite Prospects for making some of the information used in this article available online.