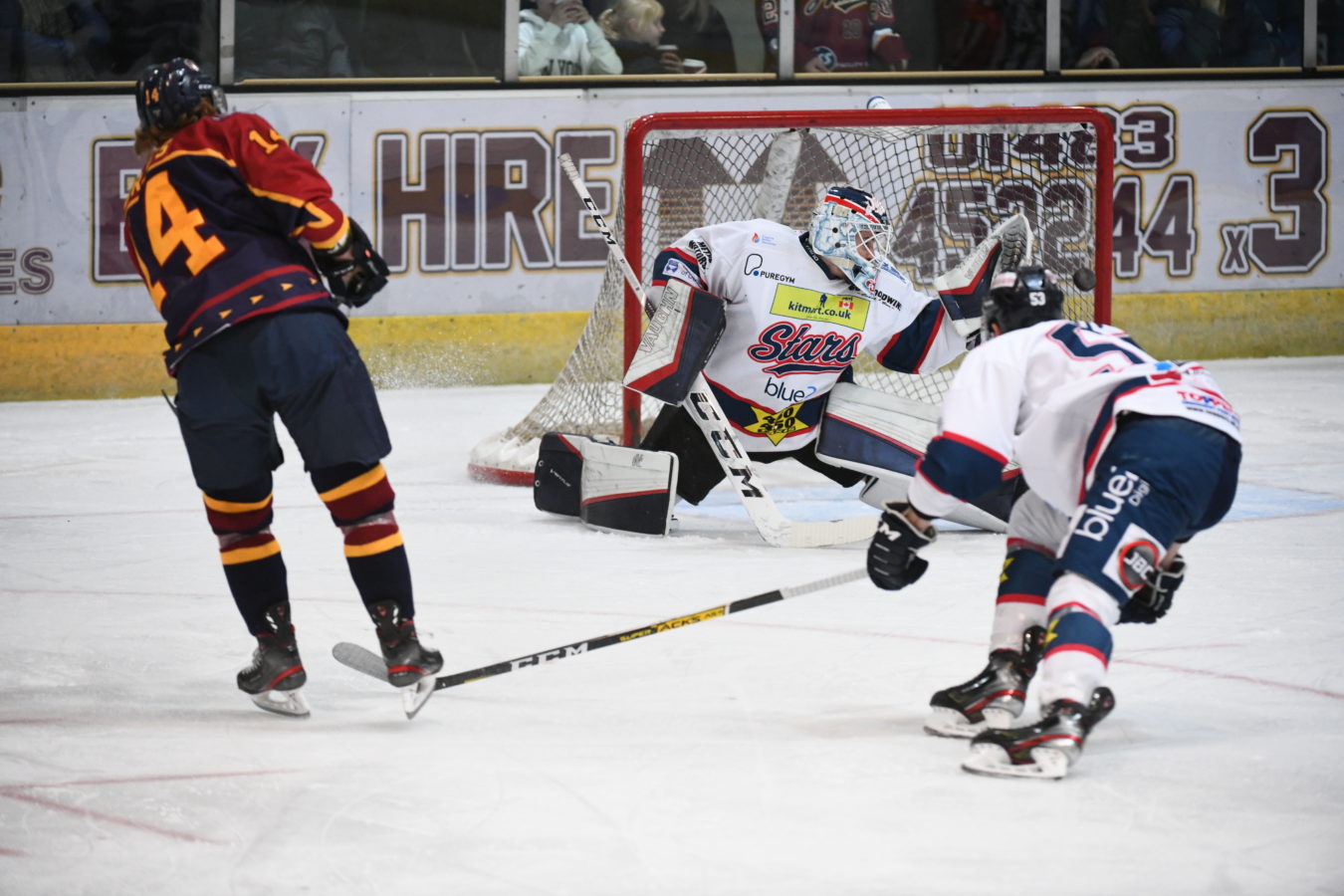 The Kitmart Dundee Stars made sure they had a better start in Guildford than they did in Nottingham on Saturday night but this time they were also missing forward, Alex Schoenborn.

The Canadian was not in the line-up due to a lower body injury and joined Kris Inglis in the stands but once the game started, Dundee quickly found themselves on the penalty kill.

A too-many men foul inside the first three minutes left them a man down for two minutes, yet the Stars saw off any danger comfortably before gaining a powerplay of their own as Guildford Flames were punished for the same infraction.

However, the Tayside team were able to capitalise on their opportunity as they opened the scoring after five minutes.

Dundee defenseman, Jagger Dirk netted the powerplay goal that gave the visitors the lead after he turned in the spilled rebound of Matt Marquardt’s shot, which Flames goaltender, Travis Fullerton failed to hold.

Omar Pacha’s men stepped up the intensity and quickly doubled their lead through Kevin Dufour in the 10th minute.

The Stars top scorer added to his tally by scoring off of his own rebound as Fullerton let another shot slip from his grasp.

Colton Kroeker had taken the puck deep into the Guildford end before passing to Anthony Beauregard, who was positioned behind Fullerton’s goal.

Beauregard wasted no time in sending the puck out in front of goal where Dufour easily picked up possession and got his first shot off before following up with a second effort that hit the back of the net.

Dundee went back on the penalty kill in the 14th minute as Dirk was punished for a holding foul and Guildford began to regain control of the game.

Paul Dixon’s side did not breakthrough on the powerplay but on 18 minutes, Jamie Crooks finally got a shot past Alex Leclerc in the Dundee net.

Flames’ forward Brett Ferguson moved the puck forward into the attacking zone but was tied up and lost control of the puck.

However, Guildford’s Ben Davies was the fastest to react and he swiftly flicked a pass across to Crooks, who was out-wide on the right and able to beat a diving Leclerc.

That late goal gave the home fans some hope just before the first break, although once the game got underway in the second period, the Stars re-established their two-goal lead.

Dundee’s Drydn Dow was the next player to punish Fullerton for giving up a rebound as he skated onto the second chance and blasted it into the goal on 27 minutes.

The rest of the middle stanza saw the Scottish side improve their lead as the Stars sniper, Dufour bagged his second goal and then his hat-trick two minutes later.

Dufour’s 25th goal of the season put Pacha’s side 5-1 up after two periods and the road team were not finished scoring yet.

After just 39 seconds of play in the third session, Matt Carter created a turnover, allowing Dirk to break forward with the puck.

Once in the Flames end, Dirk squared the puck past the sliding Flames defender, Jesse Craige, to Marquardt and the Stars captain easily finished over a scrambling Fullerton for number six.

After that, it was the Stars goaltender who saw most of the action, as Leclerc was forced to come up with some big stops.

Firstly, he denied a one-time effort from TJ Foster after Ferguson switched the play from left to right and a few minutes later, the Canadian was alert to secure the deflected shot of Kruise Reddick.

However, it was no easy save as the Stars goalie was forced to slam his trapping glove on top of his own net to stop the puck from falling out.

Eventually the home side pulled one back but it was a last minute consolation goal as Jordan Rowley smashed in John Dunbar’s pass from behind the goal with 42 seconds left on the clock.

A 6-2 win for Dundee meant they collected three out of four available points on their first and only away double header this season.

Next up for Pacha’s men is a revenge seeking Guildford side at home on Saturday before the Stars travel to Cardiff on Sunday to dance with the Devils again.