STATS OF THE STARS – WEEK TWENTY-TWO

Last week, the Kitmart Dundee Stars won and lost in two key playoff battles and this article will look at some of the standout statistics from the previous two games and for this weekend’s upcoming matches.

The Tayside club began last week’s first ever league-wide Pride event on Friday with an important victory over Glasgow.

A fourth win in seven games, gave Dundee the overall series advantage this season and the overall score now stands it at 26-18 in favour of Pacha’s team.

Also, when Matt Carter netted the Stars sixth goal into the empty net, he also scored the team’s 150th goal of the season in all competitions.

Dundee have also protected their unbeaten record at home against the Clan, as they have now secured three wins and also a draw.

Also Stars centerman, Beauregard kept his title as the team’s top scorer against Glasgow, as he netted his fifth goal against the Purple Army. 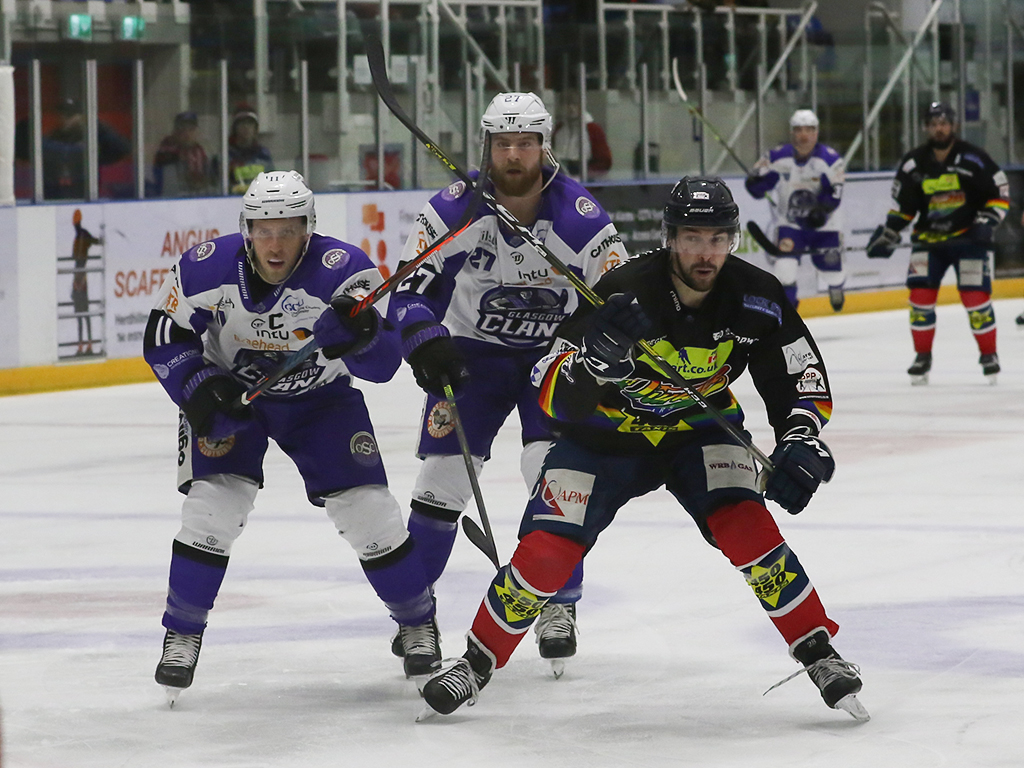 The Stars were shutout for a second time in Manchester this season, on what was their last trip of the regular season.

The Storm Shelter has not been a venue of success for Dundee this season with two 3-0 defeats and a 3-1 loss from their trio of visits.

Although, Omar Pacha’s men can level off the series score at 3-3 if they come up with a third home victory of their own in the last regular season tie between the two sides.

The next time they will clash is on February 29.

There are seven players who have strung together point-streaks over the last few matches against our Scottish rivals and they are lead by Matt Marquardt.

The Stars captain has collected seven points over the last three games, he is followed by both Drydn Dow and Carter with six in three, then Stovin with four from three.

Kevin Dufour has the next most with four in the last two fixtures, then Colton Kroeker with three in two and finally, Craig Gans has a point per game over the last pair of Scottish derbies.

There is only one fixture for the Stars this week and it is a key battle for their playoff push.

On Saturday, the Stars travel to Braehead with the aims of claiming only their second road win of the season at the Intu Braehead Arena.

Gans was the last Dundee player to score on the road against the Clan, as he bagged the team’s only goal in the second leg of the Challenge Cup Quarter-Finals.

Meanwhile, Dufour has collected the most points against Glasgow in this campaign with 11 (four goals and seven assists) and Beauregard is only four behind him with seven.

Also, goaltenders have recorded some high save percentages in this fixture with Dundee’s Alex Leclerc stopping 232 shots or 92 per cent of all the shots from Glasgow that he has faced.

Whereas, Patrick Killeen has saved 235 for 91 per cent and Jordan McLaughlin has featured twice against the Stars this season, stopping 88 per cent of the 51 shots on him.

Special teams have proved to be key in the past game between these two sides this season but both have had strong penalty kills.

Dundee have been limited to just a 14 per cent success rate but they have also killed off 82 per cent of the Clan’s powerplay opportunities.

Although, if Dundee manage to kill off two more penalties, then it will be their 150th kill of the season.

The PK Unit have successfully stopped 148 out of the 180 powerplay’s that have come against the team in this campaign.

Saturday’s match in Glasgow will face-off at 7pm.

Thanks to www.starsstats.co.uk/ which was created by Dave Sweetin (@dave_sweetin) and Elite Prospects for making some of the information used in this article available online.